Loss to Ravens Means Cowboys Season Is Over… 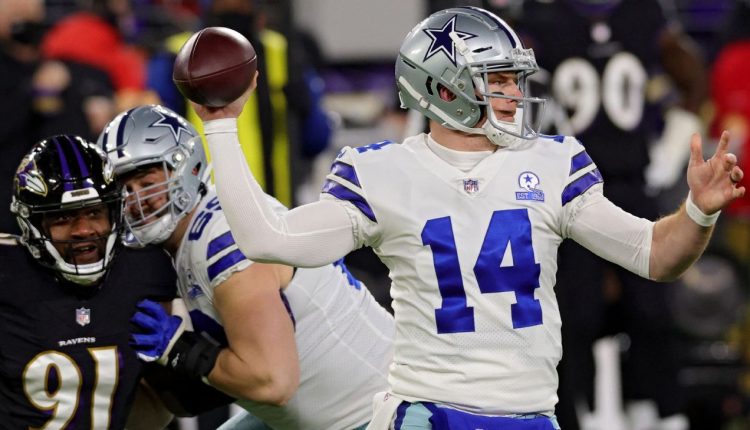 Officially, the Dallas Cowboys season is not over yet. Not even with a 3: 9 record after the 34:17 loss to the Baltimore Ravens on Tuesday.

But in reality it’s over. And maybe it’s been over for weeks now. Perhaps it ended when the Cowboys lost quarterback Dak Prescott for the season in October.

The Cowboys continued to cling to the idea that with the lackluster game of NFC East anything is possible, that everything is still ahead of them, and that they just have to put it all together.

You can keep saying if you want – you are only two games away from first place – but it will sound hollow. This is a bad team that does bad things and will look at a top 5 picks in next spring’s NFL draft.

The Cowboys have lost six of their last seven games and are guaranteed to have their first defeat since 2015. Mike McCarthy’s teams are 14-25-1 in his last 40 games.

After a 12-day hiatus due to the Ravens COVID-19 outbreak, the cowboys defenses looked like a unit that hadn’t practiced at all. How else can you explain that you gave up three rushes of at least 30 meters in the first half? The Cowboys allowed more than 200 yards on the ground for the fourth time this season, most in the NFL. That season, another 24 200-yard rushing games were allowed.

It wasn’t as bad as letting a franchise record 307 yards to the Cleveland Browns in Week 4, but it was close. Baltimore finished 294 yards on the ground, led by Gus Edwards’ 101 yards. It took seven stretcher. Lamar Jackson had 94 yards on 13 stretches. JK Dobbins had 71 yards for 11 stretches.

Unfortunately, it’s not as bad as it was in 2000 when the Cowboys had five games in which they allowed at least 200 yards of rush. But they still have four games to go.

The cowboys’ offense was functional, but still not explosive. The fighting in the red zone continued (2 of 4). Andy Dalton was only fired once, but he had no more than 19 yards to the last minute of the game. He was also intercepted in the second quarter, which turned the Ravens into a one-play touchdown ride. If this sounds familiar, it’s because the Cowboys had lower sales with 120 to 28 points. Their minus 92 point margin is the largest in the league.

Some wonder if the cowboys should fuel the rest of their games. How would anyone know if they did?

Biggest hole in the game plan: This may not be the biggest hole in a game that was such a disaster, but why didn’t Ezekiel Elliott get the ball anymore? He had more yards in the first quarter than he had in the entire Thanksgiving loss to Washington. In the third quarter he opened the series with runs of 14 and 3 meters and was drawn in favor of Tony Pollard. While Pollard did a good job for Elliott at times, Tuesday wasn’t one of those evenings. Elliott was crucial in his runs and was able to break a few tackles.

Worrying trend: Greg Zuerlein started on Tuesday after scoring eight straight goals and hitting a 31-yarder in the first quarter. He missed a 40-yarder in the second quarter (after a game penalty delay), a 53-yarder in the third quarter, and a 52-yarder in the fourth quarter. He came into the game with three mistakes that season. Zuerlein, once known as “Greg the Leg”, is 1: 6 this season when trying to score goals of 50 meters or more. His five mistakes over 50 are tied for most in the NFL. When a team doesn’t have a margin of error, the kicker just can’t miss.

5 issues it’s best to know earlier than the inventory alternate opens on December 9, 2020