A retired neutron star might have been discovered within the well-known supernova – what is the level? 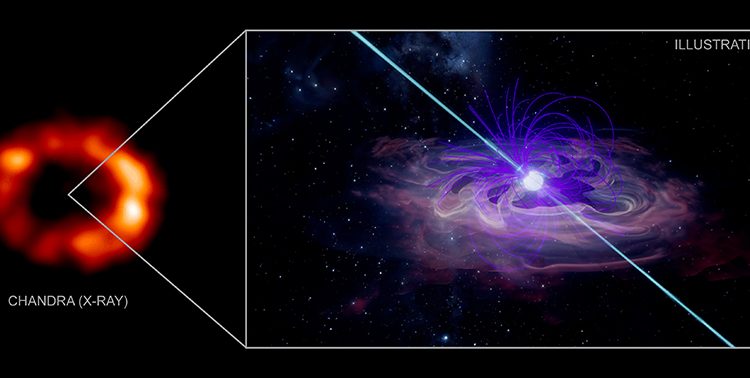 Back to the gallery

Ever since astronomers captured the bright explosion of a star on February 24, 1987, researchers have been searching for the crushed star core that should be left behind. A group of astronomers using data from NASA space missions and ground-based telescopes may have finally found it.

As the first supernova to be visible to the naked eye for about 400 years, Supernova 1987A (or SN 1987A for short) caused great excitement among scientists and soon became one of the best-studied objects in the sky. The supernova is located in the Large Magellanic Cloud, a small companion galaxy to our own Milky Way, only about 170,000 light years from Earth.

As astronomers watched debris explode outward from the location of the detonation, they also looked for what should be left of the star’s core: a neutron star.

Data from NASA’s Chandra X-ray Observatory and previously unpublished data from NASA’s Nuclear Spectroscopic Telescope Array (NuSTAR) combined with data from last year’s ground-based Atacama Large Millimeter Array (ALMA) now provide a fascinating collection of evidence for the presence of the neutron star in the center of SN 1987A.

“For 34 years, astronomers have been searching the star debris from SN 1987A to find the neutron star we expect to be there,” said study lead Emanuele Greco of the University of Palermo in Italy. “There has been a lot of evidence that turned out to be dead ends, but we believe our latest results may be different.”

When a star explodes, it collapses on itself before the outer layers are blown into space. The compression of the core makes it an extraordinarily dense object, forcing the mass of the sun into an object only about 10 miles in diameter. These objects were called neutron stars because they consist almost entirely of closely packed neutrons. They are laboratories of extreme physics that cannot be duplicated here on Earth.

Rapidly rotating and strongly magnetized neutron stars, so-called pulsars, generate a lighthouse-like beam that astronomers capture as pulses when their rotation sweeps the beam across the sky. There is a subset of pulsars that create winds from their surfaces – sometimes near the speed of light – that create intricate charged particle structures and magnetic fields known as “pulsar wind nebulae”.

Using Chandra and NuSTAR, the team found relatively low-energy X-rays from the debris from SN 1987A, hitting the surrounding material. The team also found evidence of high-energy particles that harness NuSTAR’s ability to detect higher-energy X-rays.

There are two possible explanations for this energetic X-ray emission: either a pulsar wind nebula or particles that are accelerated to high energies by the pressure wave of the explosion. The latter effect does not require a pulsar and occurs over much greater distances from the center of the explosion.

The latest X-ray study supports the case of the pulsar wind nebula – which means the neutron star must be there – by arguing against the pressure wave acceleration scenario on several fronts. First, the brightness of the higher energy X-rays remained roughly the same between 2012 and 2014, while the radio emission detected with the Australia Telescope Compact Array increased. This contradicts the expectations for the pressure wave scenario. Next, the authors estimate that it would take nearly 400 years to accelerate the electrons to the highest energies seen in the NuSTAR data, which is more than ten times older than the age of the rest.

“Astronomers have wondered if it wasn’t enough time for a pulsar to form or if SN 1987A created a black hole,” said co-author Marco Miceli, also from the University of Palermo. “This has been a mystery for several decades and we are delighted to be bringing new information to the table with this result.”

The Chandra and NuSTAR data also support a 2020 ALMA finding that provided possible evidence for the structure of a pulsar wind nebula in the millimeter-wavelength band. While this “blob” has other possible explanations, its identification as a pulsar wind nebula could be substantiated with the new X-ray data. This is further evidence of the idea that a neutron star is left behind.

If this is indeed a pulsar in the center of SN 1987A, it would be the youngest ever found.

“It would be unprecedented to be able to observe a pulsar essentially since birth,” said co-author Salvatore Orlando of the Palermo Astronomical Observatory, a research facility of the National Institute of Astrophysics (INAF) in Italy. “It could be a golden opportunity to study the evolution of a baby pulsar.”

The center of SN 1987A is surrounded by gas and dust. The authors used state-of-the-art simulations to understand how this material would absorb X-rays at different energies in order to allow a more accurate interpretation of the X-ray spectrum, that is, the amount of X-rays at different energies. This enables them to estimate the range of the central regions of SN 1987A without the opaque material.

As is so often the case, more data is needed to strengthen the fall for the pulsar wind nebula. An increase in radio waves, accompanied by an increase in X-rays of relatively high energy in future observations, would speak against this idea. On the other hand, when astronomers observe a decrease in high-energy X-rays, the presence of a pulsar wind nebula is confirmed.

The star debris surrounding the pulsar plays an important role in that it strongly absorbs its lower energy X-ray emission and makes it currently undetectable. The model predicts that this material will disperse over the next few years, reducing its absorption power. Hence, the pulsar emission is expected to occur in about 10 years and reveal the existence of the neutron star.

An article describing these results will be published in the Astrophysical Journal this week and a preprint is available online. The other authors of the paper are Barbara Olmi and Fabrizio Bocchino, also from INAF-Palermo; Shigehiro Nagataki and Masaomi Ono from the Astrophysical Big Bang Laboratory, RIKEN in Japan; Akira Dohi from Kyushu University in Japan and Giovanni Peres from the University of Palermo.

NuSTAR is a Small Explorer mission led by Caltech and administered by NASA’s Jet Propulsion Laboratory for the Agency’s Science Mission Directorate in Washington. NuSTAR was developed in collaboration with the Danish Technical University and the Italian Space Agency (ASI). The spacecraft was built by the Orbital Sciences Corporation in Dulles, Virginia (now part of Northrop Grumman). NuSTAR’s Mission Operations Center is located at UC Berkeley, and the official data archive is located in the research center of NASA’s High Energy Astrophysics Science Archive. ASI provides the mission’s ground station and a mirror archive. JPL is a division of Caltech.

Digital developments winner of the CES 2021 Tech For Change Award