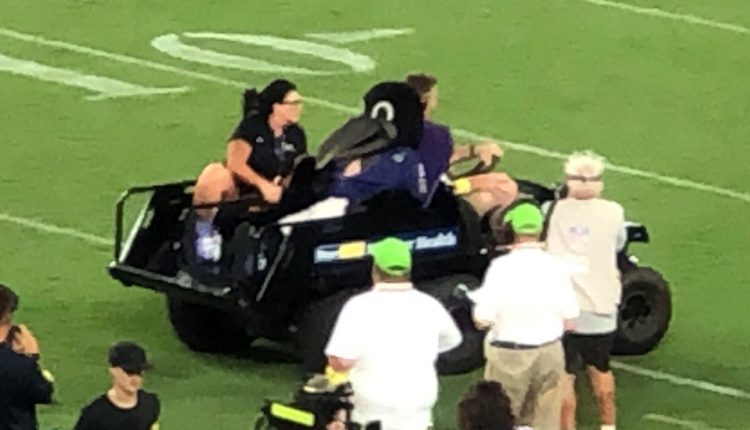 BALTIMORE — The Baltimore Ravens’ bad run of luck on injuries apparently did not end last season.

Poe, the Ravens’ mascot, was carted off the field during a mascot vs. youth football game at halftime of Baltimore’s preseason finale against the Washington Commanders on Saturday night. Poe had to be lifted into the cart by three people and had to have his left leg stabilized.

The injury occurred when Poe was caught from behind and got pushed to the ground by a teenage football player.

Ravens coach John Harbaugh walked onto the field and checked on Poe, who laid on the field for nearly five minutes because many were unsure whether he was really injured. Poe’s injury nearly delayed the start of the second half. He was taken off the field with about a minute left before the start of the third quarter.

Asked for an injury update on Poe, Ravens coach John Harbaugh said, “I knew you guys were going to ask me that.”

Harbaugh then added in jest, “No updates on that. There will be an MRI tomorrow, for sure.”

It was a surprisingly rough game between the mascots and youth football players. One of the players got shoved off his feet by a bear mascot as he tried to get into the end zone.

A replacement Poe emerged midway through the third quarter, which drew cheers from fans at M&T Bank Stadium. He gave high fives to fans.

Despite the loss of Poe, the Ravens were able to hold off Washington to win their 23rd straight preseason game. Injuries derailed Baltimore’s season last season, when 25 players were placed on injured reserve at some point. But this marked the first injured mascot for the Ravens.

With a smile, a Ravens spokesman said after the game that there will no injury updates until Week 1 of the regular season.