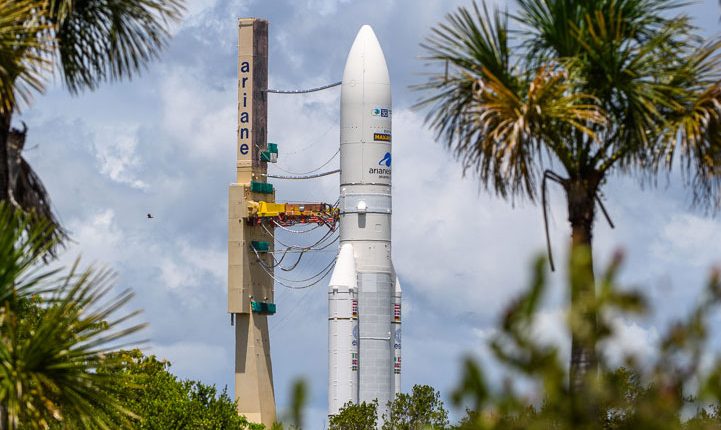 According to a new report from the US Government Accountability Office (GAO), the launch of the long-awaited, highly anticipated James Webb Space Telescope (JWST) is likely to be delayed due to an anomaly found in the Ariane 5 launcher. JWST is currently scheduled to launch on October 31, 2021, but this date could be postponed for at least a couple of weeks.

As we reported yesterday, the normally reliable Ariane 5 had problems on two previous launches that resulted in unexpected vehicle accelerations as the fairing separated from the missile. The fairing is the nose cone used to protect a spacecraft’s payload during launch and acceleration through Earth’s atmosphere.

Ariane 5 has been on the ground for several months while the European Space Agency and Arianespace are investigating the problem. However, in both anomalies, the payloads were successfully put into orbit. There are two Ariane launches in the manifest ahead of the JWST launch, and these launches are now expected in June and August 2021 at the earliest.

During a media briefing on May 11th, Greg Robinson, Program Director for JWST at NASA’s Directorate of Science Mission, said that ESA and Arianespace are going through the process of preparing the rocket for its upcoming first launch and once the first launch takes place, “After that we’ll start in about four months. “

The two launches of Ariane 5 will carry the Eutelsat Quantum satellite and the Star One D2 satellite.

The GAO report released on May 13, 2021 states that Arianespace must demonstrate that at least one of these launches has resolved the issue before JWST is allowed to launch. So far, “JWST’s launch had not been postponed; However, the project officials assessed the risk that the start date for JWST could be postponed as very likely. The project has been informed of the progress of the investigation by its international partners and continues to monitor the situation. “

NASA officials at this week’s press conference admitted that the margin of maneuver in preparing and shipping JWST to South America is basically zero.

“When we ship, the schedule margin will be pretty close to zero, but still on target,” said Robinson. “Right now we’re not working on liens and we’re in a really good place.”

According to the GAO report, the JWST project used timeline reserves – additional time to accommodate unforeseen risks or delays – faster than expected to address issues such as sunshade repairs and reinforcement.

“As a result, the project has less schedule than planned to complete the remaining activities,” the report said. “The project is also redesigning key parts of the observatory, including actuators that help deploy the sun protection. In addition, the project continues to address technical issues that could affect the project’s ability to meet cost commitments if the contractor’s workforce is required longer than planned. “

Including the risk of delaying the launch, the report states that the JWST project managers are working to manage 39 risks. Of the 39 risks, NASA will continue to manage 26 after launch, including those related to the use of sunshades and the functionality of the observatory’s sensitive near-infrared camera.

Alarmingly, some of these risks could result in the loss of the mission, but NASA has assessed that they are unlikely to occur.

As is well known, the JWST program has experienced significant schedule delays and project cost increases in the past. The entire project was rescheduled in both 2011 and 2018.

“Since the project was scheduled and costed in 2009,” the GAO report says, “the launch date has been delayed by more than 7 years and costs have increased 95 percent. Due to early technical and management challenges, contractor performance issues, and low cost reserves, the JWST program experienced schedule overruns, launch delays, and cost growth. “

Recently, however, the project has reached important technical milestones such as: B. the successful completion of the last acoustic and vibration tests in October 2020 and the implementation of sun protection exercises in December 2020.

In a mission that has seen significant postponements, it seems an iconic irony that now that JWST appears to be finally ready to go, it could experience another unexpected delay.

Medina Spirit, winner of the Kentucky Derby, will run within the Preakness Stakes after passing drug checks