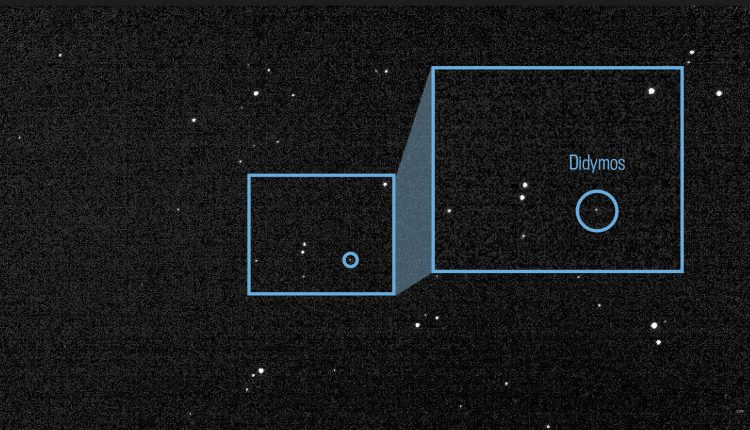 NASA’s Double Asteroid Redirection Test (DART) mission is on course to rendezvous with the double asteroid Didymos. Upon arrival on September 26, DART will collide with Dimorphos — the 160-meter (525-foot) moon orbiting the main body — to evaluate kinetic impact engineering for the first time. This proposed method of planetary defense consists of having a spacecraft collide with an asteroid to change its orbit and prevent it from colliding with Earth. In July, DART captured its first image of the binary asteroid, which NASA released earlier this week!

Captured on July 27, the image shows Didymos as a distant point of light against background stars in space. The image is a composite of 243 images taken by the Didymos Reconnaissance and Asteroid Camera for Optical (Draco) when the spacecraft was approximately 32 million km (20 million miles) from the asteroid. At this distance, the navigation camera team was unsure if DRACO would be able to resolve the asteroid system. Fortunately, the DRACO team improved the resolution of the combined image that pinpointed Didymos’ location.

“This first set of images will be used as a test to prove our imaging techniques. The quality of the image is similar to what we could get from ground-based telescopes, but it’s important to show that DRACO is working properly and can see its target in order to make any necessary adjustments before we start using the images to view the spacecraft to guide the asteroid there autonomously.”

This imaging campaign also tested DRACO’s ability to steer the spacecraft toward Didymos and Dimorphos. So far, the mission team has relied on navigation simulations based on images taken by the spacecraft’s other instruments. But with the asteroid system now in view, DART must rely on DRACO’s ability to see and process images of the binary asteroid. This will be especially important in the final hours before DART hits Dimorphos.

“When we see the DRACO images of Didymos for the first time, we can iron out the best settings for DRACO and tweak the software,” said Julie Bellerose, the DART navigation director at NASA’s Jet Propulsion Laboratory (JPL). “In September we will refine what DART is targeting by getting a more accurate fix on the location of Didymos.”

For the next three weeks, the DART team will conduct observations with DRACO every five hours to perform corrective maneuvers. These will reduce the margin of error for the spacecraft’s final impact trajectory towards Dimorphos. The final maneuver will take place on September 25, approximately 24 hours before impact, when the navigation team will know Dimorphos’ position to within 2 km (1.24 mi). From this point on, DART must rely on its autonomous system to pilot itself and collide with Dimorphos.

The European Space Agency (ESA) is planning a follow-up mission, the Hera spacecraft, to be launched in September 2024. At the rendezvous with the binary asteroid system in December 2026, the probe will study the consequences of the impact test by measuring Dimorphos’ orbit for discernible changes. This will verify that the kinetic impact method can deflect asteroids and is an effective means of protecting Earth from potentially hazardous asteroids (PHAs).