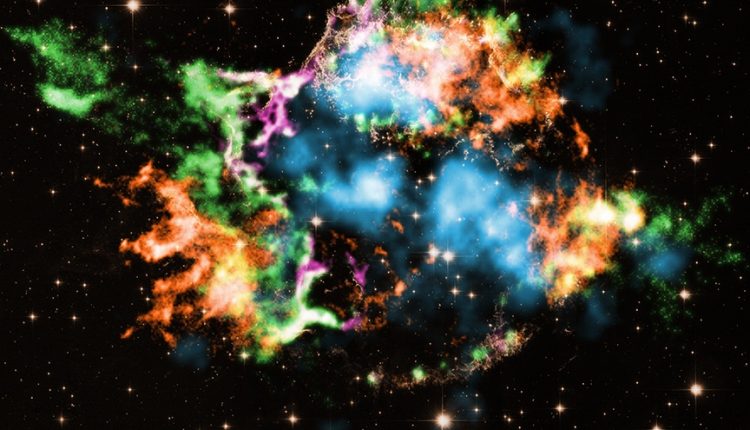 If you are a fan of Titan, you should go to the next supernova. You will get more than enough of it. And its presence can help astronomers understand how supernovae work.

We understand the basic picture of how the most massive stars die. As soon as an iron core fuses in their centers, they no longer produce energy from nuclear reactions. The star collapses and compresses the iron core so much that it turns into a protoneutron star. The rest of the star ricochets off this neutron core and begins to explode. Either the core remains or it itself collapses into a black hole.

But that’s not the end of the story. Simulations of these supernova explosions show that the pressure wave quickly loses energy and comes to a standstill before the star booms. Astrophysicists believe that a flood of neutrinos – tiny, nearly massless particles that are released when the iron core transforms into a neutron star – revitalizes the shock wave and gets the entire supernova party going.

As convincing as this story appears in our computer simulations, it is difficult to actually observe it because we cannot look into a supernova when it is happening. So we have to take the next best thing and try to predict how these explosions will behave and what they might create, and compare that to our best guesses from the simulation.

And who knew Titan would hold the key.

Most, if not all of the titanium you encounter in your everyday life was forged in a dying star. It can only form in the intense, neutrino-driven fury of the supernova explosion, but so far astronomers have not seen a titanium in the supernova’s ejecta.

Now a team of astronomers examined NASA’s Chandra X-ray Observatory to study Cassiopeia A (Cas A), the remnants of a supernova that was triggered 350 years ago at a distance of 11,000 light years.

“Scientists believe that most of the titanium used in our daily lives – like in electronics or jewelry – is made in a massive stellar explosion,” said Toshiki Sato of Rikkyo University in Japan, who led the study, which in the journal Nature appears. “Until now, however, it has never been possible for scientists to capture the moment immediately after the manufacture of stable titanium.”

“We have never seen this signature of titanium bubbles in a supernova remnant, a result that was only possible with Chandra’s incredibly sharp images,” said co-author Keiichi Maeda of Kyoto University in Japan. “Our result is an important step towards solving the problem of how these stars explode as supernovae.”

The presence of titanium is a smoking weapon that neutrinos blamed for creating the supernova explosion. The observations will help validate current models and lead to a more detailed understanding of these powerful explosions.