Floor response to elevated forcing – watts with that? 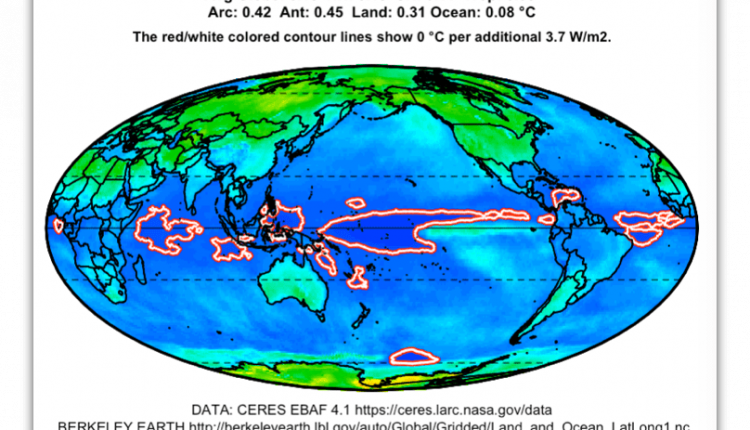 Thanks to the excellent comments from people here on my “A Peer Preview Request” post, I thought I was going down the rabbit hole of the surface reaction to respond to increased surface radiation on immersion, AKA radiative forcing, or just “forcing.”

Surface radiation includes net solar or short-wave propulsion as well as falling infrared thermal radiation from the atmosphere. Worldwide, the sum of these two amounts averages around half a kilowatt per square meter around the clock.

(Please don’t bother me with claims that there is no long-wave radiation from the atmosphere. It was measured, not estimated, or modeled, but measured, thousands of times by scientists around the world for over a century. If you don’t believe it’s real then you have to do your homework … and in any case this is not the place to discuss it. I never delete comments on other people’s threads, and I almost never delete comments on my own threads, but in this case I make the exception. Please just pick up the debate elsewhere, thank you.)

The most straightforward way to see how variations in overall drivetrain affect temperature is to use actual data. So on a grid cell to grid cell basis, I looked directly at how the surface temperature is influenced by the fluctuations in the drive. For the surface temperature, I used the Berkeley Earth grid temperature. and for radiative forcing I used the CERES data. I first removed the seasonal variation from both sets of data, and then using standard linear regression, I calculated how much the temperature changed when the forcing in each grid cell changed by one watt per square meter (W / m2). Then I multiplied that by 3.7 because the drive theoretically increases by 3.7 W / m2 when the atmospheric CO2 content doubles.

Here is the result of this analysis:

Figure 1. Change in temperature over a period of 20 years due to the change in long-wave (LW) and short-wave (SW) depth at the surface.

Note that this results in 0.15 ° C for every additional 3.7 W / m2. As expected, the ocean changes less than land due to its greater thermal mass, and as expected the poles change more than the tropics. Note that there are large areas of the tropical ocean where surface temperatures correlate negatively with forcing. This means that when the temperature rises in these areas, the clouds rearrange themselves in order to reduce the incident radiation.

However, there is one big problem with this method: it doesn’t give the surface time to level itself out and adapt to the changes in forcing because the changes happen on a monthly basis. So this is just one short term Reaction to alternating forcing. But what we want to know is what is the long-term response to such a change?

In my last post, I pointed out a novel way to calculate this. I took the average of all the Berkeley Earth and CERES 20 years 1 ° latitude and 1 ° longitude data sets that I had used to calculate Figure 1 above. Then I made a scatter plot where each point is a grid cell. I did a LOW smoothing on the data to show the average trend. Here is the graphic from my last post.

Figure 2. Scatter plot of surface temperature versus declining surface radiation. The slope of the LOWESS curve is the change in temperature that results from a change in downward radiation of 1 W / m2.

On further reflection, I realized that I could get a more accurate answer by dividing the two sets of data into land and sea. Here are those results.

Figure 3. As in Figure 2, but only for the country.

Well, these are interesting in their own right. As we saw in Figure 1, the surface response to increased forcing is negative at high ocean temperatures, but not at high land temperatures. In addition, this way the data is grouped more closely around the LOWESS smoothing.

These two diagrams lead to the following relationships:

Figure 5. Change in land temperature in ° C corresponding to a change in surface forcing at different temperatures / forcing levels of 3.7 W / m2.

Figure 6. Change in sea temperature in ° C corresponding to a change in surface forcing at different temperatures / forcing levels of 3.7 W / m2.

Finally, I took the LOWESS smoothing for the sea and land and used them as look-up tables to find the average temperature response for a given level of surface radiation. I used these temperature responses to calculate the expected temperature change for a global increase in immersion area forcing of 3.7 W / m2 for every grid cell on the globe. Figure 5 shows the final result of this calculation.

Figure 7. Expected long-term change in surface temperature with a change of 3.7 W / m2

Some notable things. First, the main characteristics are the same, although this is the result of a completely different calculation method than that used in Figure 1. The ocean is still heating up less than the land. However, since this is long term, the ocean has had enough time to equalize, so the ratio of the two is not that great (Figure 1, ocean 0.08 ° C, land 0.31 ° C per 3.7 Wm2. Figure 7 above , Ocean 0.30 ° C, land 0.50 ° C per 3.7 W / m2). We also see that the poles are heating up more than the tropics, as shown in Figure 1.

Finally, we see almost the same general areas of ocean cooling as radiation increases, as we saw in Figure 1.

How well does this represent the surface’s long-term response to changes in radiation? I would say just fine. Suppose we have two adjacent 1 ° x1 ° grid cells on the surface. One is slightly warmer than the other because it has more radiation to immerse in, and the difference between the two temperatures divided by the difference in the two radiation levels is a valid measure of how much the additional radiation is heating the planet.

Two important points about this situation. First, the average temperature in these two places is the result of centuries of having roughly the same average radiation. We are talking about fluctuations over time of a few W / m2, and the average radiation when immersed is about half a kilowatt per square meter.

Second, if during this time global downward radiation has slowly increased due to changes in greenhouse gases, the temperature has increased in both locations, and this shifts the points just a little up and to the right in the above scatterplots. However, this does not change the underlying relationship of the temperature differences divided by the radiation differences.

So I would say that this is a very valid method to accurately measure the long-term real surface temperature changes due to changes in surface radiation at depth.

And the bottom line of the analysis? A 3.7 W / m2 increase in surface radiation when immersed, the theoretical increase from doubling CO2, only increases the surface temperature by something on the order of a third of a degree C.

Here on our dry, wooded hillside in California, the state has officially declared our county a drought area. I went out yesterday to have a look at the two water tanks that together supply our house and the rental house on our property. Instead of having about 5,000 gallons between the two tanks as usual, they were about 1,500 gallons … as you can imagine, I said bad words. Possibilities regarding our two-well water system:

I have to love owning land, you will never be bored. To those aware of my troubled past, it’s no surprise that I used to drill water wells and install and maintain pumps for money, but I’m retired so the guy comes from the company that drilled our well take a look out on Friday.

Best for everyone, stay healthy, hug your family, glory in the day, because as the song says, “You don’t miss your water until your well is dry” …