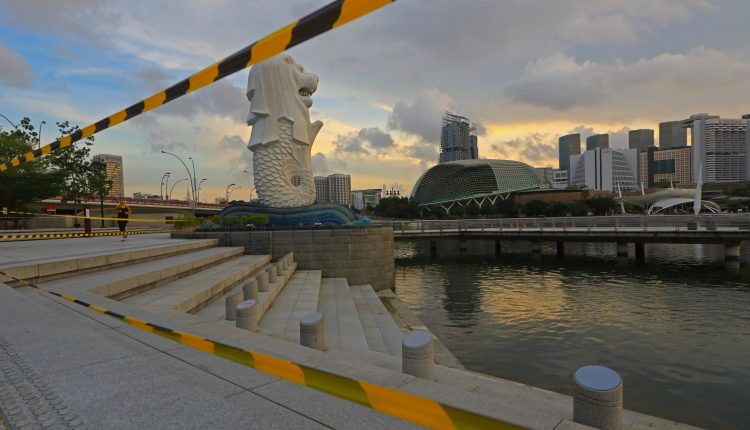 A woman walks past a cordoned off Merlion Park in Singapore on June 12, 2020.

SINGAPORE – Singapore’s benchmark index, the Straits Times, closed 2.18% lower on Friday after the government announced further tightening of Covid-19 restrictions and the likelihood of another delay in the Hong Kong air travel bubble.

Aviation stocks were hit hard. Singapore Airlines was down 5.66% while SATS, an aviation catering and airport ground handling company, fell 3.91%.

The Singapore government said it was “very likely” that the Hong Kong travel bubble will not start as planned on May 26. The Southeast Asian country has tightened measures to curb the increasing cases of Covid locally, including stopping all dine-in services and limiting public gatherings to two.

The Singapore-Hong Kong air travel bubble would have allowed travelers to skip the quarantine. There have been several delays since it first launched in November 2020 as Hong Kong reported a resurgence in Covid-19 cases.

Both Singapore and Hong Kong are major Asian business centers with no domestic air travel markets. Your tourism and aviation industries, which are heavily reliant on international travel, have been hard hit by the pandemic.

Singapore Minister of Transport Ong Ye Kung said Hong Kong was “a very safe region” with few new Covid cases discovered daily. However, infections have risen in Singapore and the city-state is unlikely to reach the threshold to start the travel bubble, he added.

Singapore and Hong Kong have previously agreed that the travel arrangement will be suspended if the number of unlinked local Covid cases in both cities exceeds five on a moving average of seven days.

In a preliminary update on Friday, the Singapore Ministry of Health announced that it has confirmed 52 new cases of Covid-19. Among the cases are 24 locally transmitted infections, four of which have not been linked to previous cases.

The latest numbers suggest that the Southeast Asian city-state’s cumulative confirmed infections are more than 61,500, according to the Ministry of Health.

Meanwhile, Hong Kong identified an imported case on Friday, bringing the total number of confirmed or likely infections since the outbreak to 11,819, official data showed. The city has reported 210 deaths, according to the data.

Ong said he spoke with Edward Yau, Hong Kong’s Secretary for Trade and Economic Development, about the Covid situation in Singapore. Both sides will make a decision early next week on whether to continue the air travel bubble launch, Ong said.

The Singapore government also announced that there will be more Covid-19 restrictions starting this weekend after local infections increase. The measures will take effect from this Sunday until June 13th.

The new measures include:

The government will review the measures halfway – or about two weeks later – to see if an adjustment is needed, said Lawrence Wong, Singapore’s education minister and co-chair of the Covid task force.

Yu Liuqing, a country analyst with consulting firm The Economic Intelligence Unit, said in a note that the tightening “will effectively freeze the recovery in private consumption in the short term.”

But Singapore’s economy as a whole is not going to shrink unless another lockout period – known domestically as a “breaker” – is imposed for an extended period, he added.

Before the announcement on Friday, Singapore had already tightened the restrictions. These measures began last weekend and included pre-event testing for large gatherings and the closure of some indoor gyms.