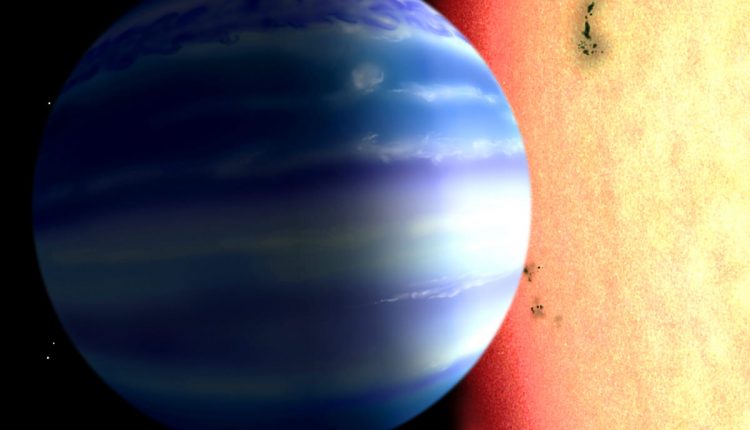 The molecule hydroxyl (HO) is common on Earth, but astronomers have not yet established how common it is on other worlds. For the first time, astronomers finally demonstrated it in the atmosphere of an ultra-hot Jupiter, WASP-33b.

WASP-33b is a strange exoplanet. 400 light years away from us, the planet is known as the ultra-hot Jupiter: It is a gas giant that orbits its host star closer than Mercury to our own sun. Because of this extreme distance, the WASP-33b’s atmosphere reaches a temperature of over 2,500 ° C, which is hot enough to melt most metals.

This exoplanet is a great candidate for studying alien atmospheres because it is so hot. At these temperatures, chemicals in the atmosphere emit radiation with different spectral fingerprints. As WASP-33b orbits its star, the radiation emitted by the chemicals regularly shifts red and blue, allowing astronomers to spot them against the glare of the parent star.

Using this technique, an international collaboration of astronomers led by a researcher from the Queen’s University Astrobiology Center in Belfast used the Subaru telescope to find signatures of chemicals in the atmosphere of WASP-33b.

They found hydroxyl – a molecule made up of an oxygen atom and a hydrogen atom (abbreviated as OH). Hydroxyl probably plays an important role in the chemical mix of the WASP-33b atmosphere because it interacts with water vapor and carbon monoxide.

The lead researcher at Queen’s University in Belfast, Dr. Stevanus Nugroho said, “This is the first direct evidence of OH in the atmosphere of a planet beyond the solar system. It not only shows that astronomers can detect this molecule in exoplanet atmospheres, but also that they can begin to understand the detailed chemistry of this planetary population. “

On Earth, hydroxyl is formed in the atmosphere when water vapor interacts with oxygen. On WASP-33b, the hydroxyl group is likely to form when the intense heat of the star bursts water vapor.

“We only see a preliminary and faint signal from water vapor in our data, which would support the idea that water is being destroyed to form hydroxyl in this extreme environment,” said Dr. Ernst de Mooij of Queen’s University Belfast, co-author on this study.

On the importance of the work, Dr. Neale Gibson, Assistant Professor at Trinity College Dublin and co-author of this paper: “The science of extrasolar planets is relatively new, and a major goal of modern astronomy is to study these planetary atmospheres in detail, and ultimately in search of” Earth-like “exoplanets – planets like ours. Each newly discovered atmospheric species further improves our understanding of exoplanets and the techniques required to study their atmosphere, and brings us closer to that goal. “