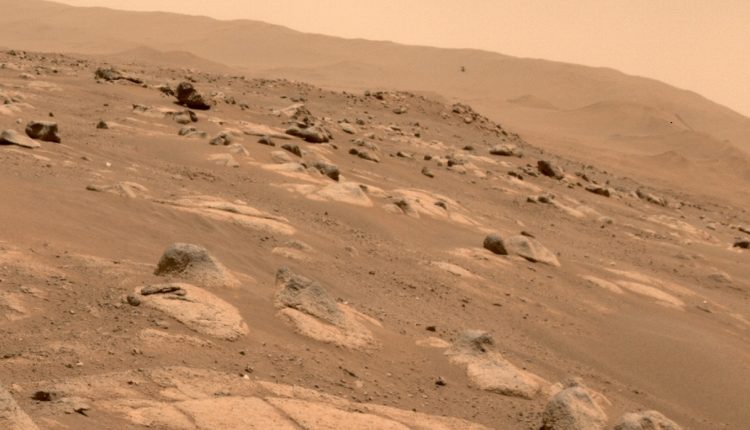 On April 30, 2021, the Ingenuity Mars Helicopter reached another milestone with its fourth flight on Mars and set new records. This time, the helicopter took off at 12:33 a.m. Mars Standard Time (10:49 a.m. EDT; 7:49 a.m. PDT) and ascended to a height of 5 meters. It then traveled south about 133 meters and then back in about two minutes (117 seconds).

That adds up to a 266-meter round trip that is more than any previous Ingenuity flight – even the record-breaking third flight. On that occasion, held on April 25, Ingenuity flew 50 meters in 80 seconds and reached a top speed of 7.2 km / h. This set new records for both speed and distance of all previous helicopter flights, which took place on April 19th and April 22nd.

Ingenuity took many pictures with both the color camera and the black and white navigation camera during the last flight. This latter camera tracks surface features in flight and the images captured are typically used by Ingenuity’s flight controller. These are then discarded unless the heads of the mission decide they are of particular value and save them for later use.

This built on what mission controllers had done during the previous flights, where they took pictures to test the cameras and the helicopter’s ability to process them on board (some of which were saved for later). On this flight, the engineers saved even more images than on any of the previous flights: 60 in total. All of this was taken during the last 50 meters of the flight as the helicopter returned to its landing site.

Controlling an aircraft from Earth while it is making alien explorations presents mission controllers with some unique challenges, but also opportunities. Aside from providing another way to test Ingenuity, they also offer a perspective on Mars that humanity has never seen before. In all previous cases, photos were taken of rovers, landers or orbiters – in short, from the surface or from orbit.

The Heads of Mission plan to use these latest images to learn more about the surface features and terrain in Jezero Crater. Some of the black and white images were captured as stereo pairs so the team can test their ability to create 3D images of the surface. This work is especially exciting as the ability to resolve features into three dimensions will be of great benefit for future missions.

The same method could provide close-up views of terrain features that orbiters cannot, scout out regions inaccessible to rovers, and even extend the range of human discovery missions. Last but not least, the mission leaders hope to use these images to investigate the height of various locations under “Van Zyl Overlook” where Persevarance is currently parked and serves as a communication base station.

The rover reached this point after traveling approximately 330 meters (1080 feet) from its starting point on February 18, 2021, which has since been named Octavia E. Butler Landing. In the meantime, the mission team has a lot of data to analyze and is looking forward to further record-breaking test flights. All in all, they couldn’t be happier with Ingenuity’s performance to date, which they describe as “full of letters”.