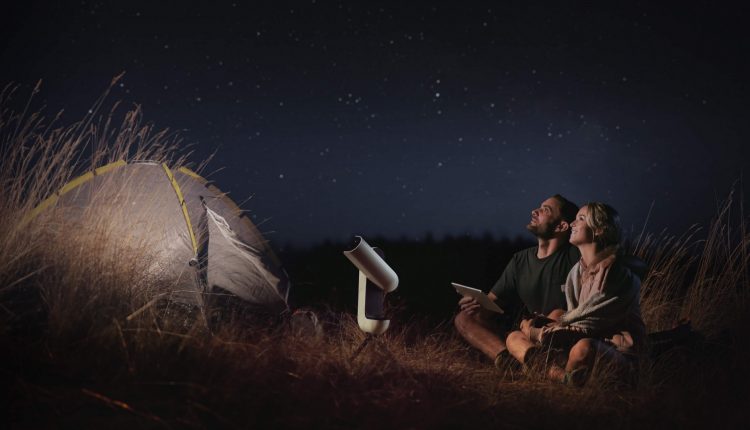 At just 40 cm (15″) tall and weighing 5 kg (11 lbs), the Vespera is an Alt-Az system mounted on a single swing arm. Like the Stellina, the Vespera is supported by the new and improved Singularity App by Vaonis, which is available for both iPhone and Android. The app allows users to plan their observing session, control the telescope and take and share images. The user can also load coordinates manually, which is handy for adding new ones Add novae or comets to the database.

The Vespera can accommodate a small hygrometer (dew) sensor, which must be installed by the user after delivery, and a light pollution filter (both sold separately). The company plans to offer a solar filter for the Vespera by the end of 2022.

Using the Vespera in the field is an easy (albeit a bit slow) process; After connecting the scope to the phone’s WiFi and initializing the station, Vespera begins searching for known star patterns in the sky. Using satellite GPS and a method known as “plate solving,” the system compares star patterns in the sky to its memory database.

Note that the WiFi connection will also temporarily cut the mobile data connection for the phone. Our field test suggests that the WiFi is good up to a distance of about 25 feet and the Vespera can be paired with multiple devices (phones, tablets, etc.).

Vespera, unpacked and ready to use. Photo credit: Dave Dickinson.

Portability makes the Vespera a joy to use. The rifle scope is light enough for a simple mountain hike and can be set up quickly. The telescope has around four hours of continuous battery life, although it uses its own dedicated magnetic clutch charger, which is often seen on many smartwatches these days…actually, I’m surprised the Vespera uses this type of charging connector, given that the European Union has mandates that all chargers be USB-C by the end of 2024.

Specifications – The Vespera is built around a 50mm quadruplet achromatic refractor telescope coupled with a two megapixel imager and 100 gigabytes of memory. After alignment and target acquisition, the image slowly builds up on the smartphone screen; The longer it stares at an object, the more signal versus noise is collected and the sharper the image appears.

What we like: The real strength of Vespera and other smartscopes is that they put deep-sky imaging in the hands of suburban amateur astronomers. I could track bright Messier bullets and targets from the blurry downtown skies that I probably wouldn’t otherwise attempt. But under really dark skies, the Vespera shines. I can easily capture dark lanes in the Andromeda Galaxy (M31) after just a few minutes of exposure, and the Veil Nebula in Cygnus was a worthy target. We even had the opportunity to use Vespera to follow a frigid invader of the inner solar system, comet C/2017 K2 PanSTARRS, this summer. In fact, we’d go so far as to say that the diminutive Vespera is almost as good at astrophotography as its much larger sister Stellina.

A segment of the Veil Nebula through Cygnus captured by Vespera. Photo credit: Dave Dickinson.

What we don’t like- As mentioned, the Vespera is extremely slow in terms of initialization, fine-focusing, targeting, and imaging; all this is automatic but a bit tedious; A live view function would be great. I found that the initial images were occasionally just a touch blurry (most likely due to the optics cooling to ambient temperature) and it required going through the initialization process to achieve fine focus. Also, the blue-rimmed power button, while elegant, also tended to turn on with the slightest touch or touch, potentially causing the telescope to stay on in storage and consuming valuable battery power.

A stunning view of the Trifid Nebula captured by the Vespera telescope. Photo credit: Dave Dickinson.

The rise of smartscopes like Vespera and their ilk represents the future of amateur astronomy; I look forward to the day we can live stream the view from the remote Moroccan desert via Smartscope and Starlink connection. At $2,499 retail, the Vespera is still a bit high-end… but the price is definitely moving in the right direction.