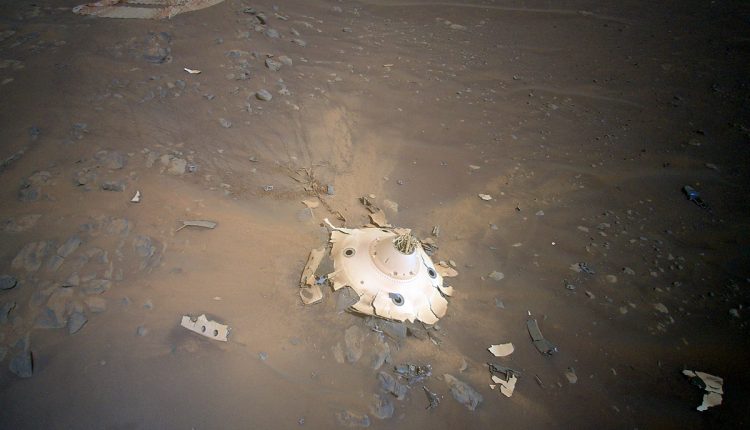 A recent blog by Dr. Justin Maki, imaging scientist and deputy principal investigator of the Perseverance rover’s Mastcam-Z camera, provides a detailed account of the debris left strewn on the Martian surface by the Entry, Descent, and Landing (EDL) system during its handover of the Perseverance rover to the crater Jezero. This blog highlights the amount of hardware needed to send our brave, robotic explorers to the Red Planet while also discussing the importance of imaging such debris.

“For example, the Ingenuity helicopter on Sol 414 (April 19, 2022) returned a detailed color image of the discarded parachute and back shell located 1 km northwest of the landing site.” Maki writes. But how important is it to locate and identify debris from past missions on Mars?

dr Briony Horgan, co-researcher on the Perseverance rover and associate professor of planetary science in Purdue University’s Department of Earth, Atmospheric, and Planetary Sciences, said: “The concerns about contamination are pretty minor, but we’re actually using hardware on the surface to track dust accumulations !” The parachutes are particularly good at this, and measuring their brightness over time can help us understand how dust deposition changes over time due to local weather conditions.”

dr Maki continues on his blog, “A few weeks later, Perseverance entered the Hogwallow Flats region and acquired a high-resolution 360-degree Mastcam Z-Panorama. When these images were linked to Earth, a member of the science team in Europe spotted the bright material (at 2:50 p.m. Pacific Time) in a Mastcam Z image of Sol 467 (June 12, 2022) and immediately suggested that it could be debris from the Entry, Decent, and Landing (EDL) system. Later that morning, it was confirmed by the EDL hardware team at JPL: Perseverance had imaged a piece of multi-layer insulation (MLI), likely from the Skycrane, which flew away from Perseverance’s landing pad after touchdown to ensure it would tumble out safely at distance from the rover .” But can debris scattered on the surface of Mars disrupt the operation of the Perseverance rover?

“Mars 2020 includes several design features to protect against this type of debris that will interfere with the rover’s operations,” said Steven Lee, associate project manager for Mars Science Laboratory/Curiosity. “The presence of debris on the ground in itself does not pose a risk to the Perseverance mission. Only two rover components were able to contact debris on the ground. First, the mobility system is designed to be robust to a variety of terrain types and to drive right over that debris with ease. Likewise, the sampling system is designed to operate in an environment with dust and pebbles (including dust and pebbles generated during grinding or coring). Occasionally we also perform a “chuck clean hit” to shake material out of the corer chuck.”

NASA’s Perseverance rover isn’t the first Mars rover to photograph its own debris, as Dr. Maki notes on his blog, “The Mars Exploration Rover (MER) Opportunity rover photographed a heat shield up close on Sol 335 (January 2, 2004) from the surface mission. These images showed a debris field that stretched several meters and contained charred heat shield material, metal springs, and thermal blanket material. The Curiosity images also showed a rock (“Heatshield Rock”) believed to be a meteorite – the original version of EDL debris.” What specific steps can be taken in the future to remove this debris on future missions to reduce?

“Right now, the number of missions that we’ve landed on Mars has been so small that they make a very small contribution to the surface,” said Dr. Horgan. “And I like to think that one day future Martians will preserve these historic spacecraft landing sites and hardware, perhaps as the first interplanetary parks!”

As always, keep doing science and keep looking up!