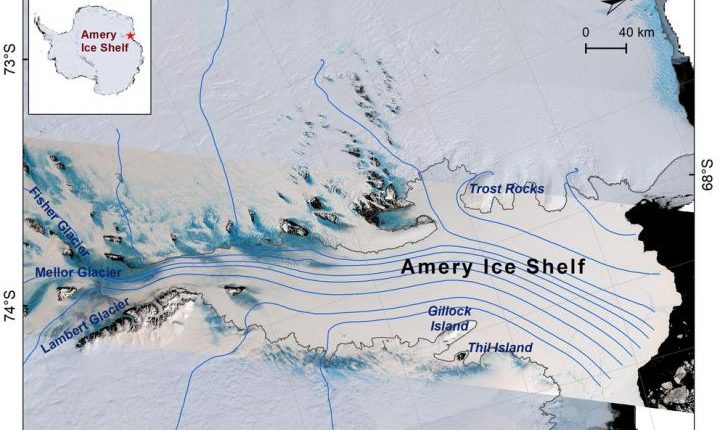 IMAGE: SATELLITE IMAGE OF THE AMERY ICE SHELF IN EAST ANTARCTICA. THE BLUE LINES REPRESENT THE MOVEMENT OF THE ICE AS IT FROM THE CONTINENT TO THE EDGE OF THE … AD CREDIT: SHUJIE WANG, PENN STATE

When a block of ice the size of Houston, Texas broke off the Amery Ice Shelf in East Antarctica in 2019, scientists expected the calving event, but not exactly where it would happen. Using satellite data, scientists can now measure the depth and shape of ice shelf fractures to better predict when and where calving events will occur, the researchers said.

Ice shelves make up nearly 75% of the Antarctic coast and support – or hold – the larger glaciers back on land, said Shujie Wang, assistant professor of geography at Penn State. If the ice shelves collapse and Antarctica’s glaciers fall or melt into the ocean, sea levels would rise up to 200 feet.

“When we try to predict the future contribution of Antarctica to sea-level rise, the greatest uncertainty is the stability of the ice shelf,” said Wang, who also holds an appointment at the Institute for Earth and Environmental Systems. “There is no easy way to map the depth of fractures in the field at a regional level. We have found that satellite data can capture the depth and surface morphology of ice shelf fractures, allowing us to consistently monitor this information over a large area. “

Between October 2018 and November 2019, Wang and her colleagues examined high-resolution data collected by the Ice, Cloud, and Land Uplift Satellite (ICESat-2) over the Amery Ice Shelf, which is roughly the size of West Virginia. The satellite shoots green laser pulses to the land surface and uses reflected photons to determine the surface elevation. While other satellites have a resolution of several thousand feet, ICESat-2 has a resolution of approximately 56 feet, which allows smaller fractures and fracture morphology to be seen.

The researchers then passed the ICESat-2 data through an algorithm that identifies surface depression features to locate and characterize fractures in the ice. They reported their results in the magazine Remote Sensing of Environment.

The researchers identified three types of fractures – U-shaped, parabolic and V-shaped fractures – to a depth of 30 meters in the ice shelf. They also realized that this surface information provides insights into what is happening hundreds of feet below the surface of the ice.

“By incorporating satellite-based vertical information, future ice shelf models can be improved,” said Wang. “It can help us predict calving fronts and determine where an ice shelf is susceptible to these events.”

Other contributors to this study were Patrick Alexander and Marco Tedesco, the Lamont-Doherty Earth Observatory at Columbia University, and NASA’s Goddard Institute for Space Studies; Qiusheng Wu, University of Tennessee; and Song Shu, Appalachian State University.

The National Science Foundation and NASA supported this study.