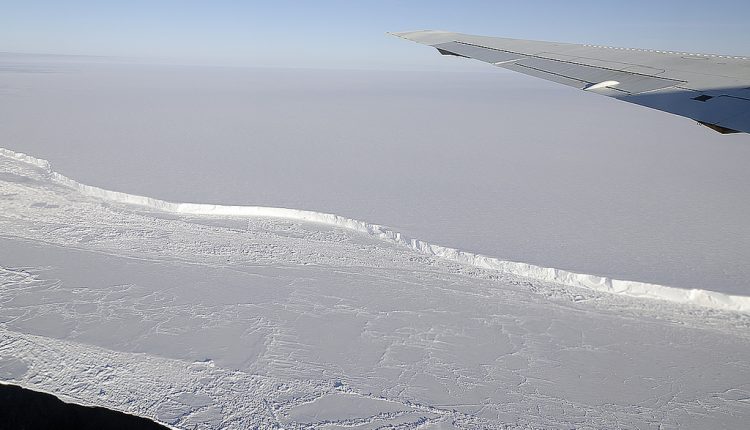 Glaciologists have closely monitored the ice shelves in Antarctica for signs of cracks and chasms that indicate they are breaking apart. The loss of ice in the polar regions of the world is one of the many consequences of climate change, which leads to rising sea levels and various feedback mechanisms. Recently, on February 26, ESA’s Copernicus Sentinel-1 satellite saw a giant iceberg that broke off the Brunt Ice Shelf in Antarctica.

The Copernicus Sentinel mission consists of two polar orbit satellites based on synthetic aperture radar images in the C-band to perform earth observations in all weather conditions. In recent years the Brunt Ice Shelf has been monitored for signs of cracks and chasms. According to the recently captured images, an iceberg larger than New York City broke off and floated at sea.

The isosceles iceberg (A-74), about 1,270 km2 in size, broke away from a region north of the McDonald Ice Rumples, which is part of the larger Brunt Ice Shelf that borders the Weddell Sea in northwestern Antarctica. While not particularly huge by Antarctic standards, it is the largest iceberg to have broken off the Brunt Ice Shelf to date.

Before and after pictures of breaks in the Brunt Ice Shelf. Photo credit: Copernicus Sentinel-1 / ESA

According to the naming conventions, icebergs are initially identified using the Antarctic quadrant in which they were originally sighted, a sequential number and (if they break off) a sequential letter. In recent years, a series of cracks and precipices have formed in this 150-meter-thick sheet, the most recent of which was discovered in 2019.

This rift was observed to extend towards another further north near the Stancomb-Wills glacier tongue. Together, these cracks formed a cut through the ice shelf, prompting ESA to closely monitor them via satellite. These observations enabled Sentinel-1 to obtain ice surface velocity measurements, which indicated that the section north of the new rift was moving 5 m per day, making it the most unstable.

In the early hours of Friday, February 26, the satellites saw the newer rift quickly widen and eventually break away from the rest of the ice shelf. As Mark Drinkwater, a researcher with ESA’s Earth Observation Programs, explained in an ESA press release:

“Although the calving of the new mountain was expected and forecast a few weeks ago, it is still fascinating to watch such distant events. In the weeks and months that followed, the iceberg could be swept away in the fast southwest flowing coastal current, run aground or cause further damage by hitting the southern Brunt Ice Shelf. Therefore, we will be carefully monitoring the situation using data from the Copernicus Sentinel-1 mission. “

Fortunately, this separation poses no threat to the Halley VI Research Station, which was positioned further inland in 2017 after the ice sheet was classified as unsafe. This platform is part of the British Antarctic Survey, which uses the local climate-sensitive zone to conduct global observations of terrestrial, atmospheric and space weather.

Routine satellite surveillance is an important part of geosciences and observation as it provides unparalleled views of remote regions such as Antarctica. Of particular concern is how ice shelves can maintain their structural integrity in response to changes in atmospheric and ocean temperatures. Sentinel and other satellites are also responsible for tracking icebergs after they swim at sea.

The Copernicus Sentinel’s radar imaging capabilities make it useful as it can take pictures day and night and all year round, which is especially important during the Australian winter months. Still waiting for a real name, the A-74 is just the latest iceberg to break off from Antarctica and the largest to date.

As an indicator of climate change, it shows how the problem is escalating and will get worse in the years to come.