Our a part of the galaxy is stuffed with binary stars 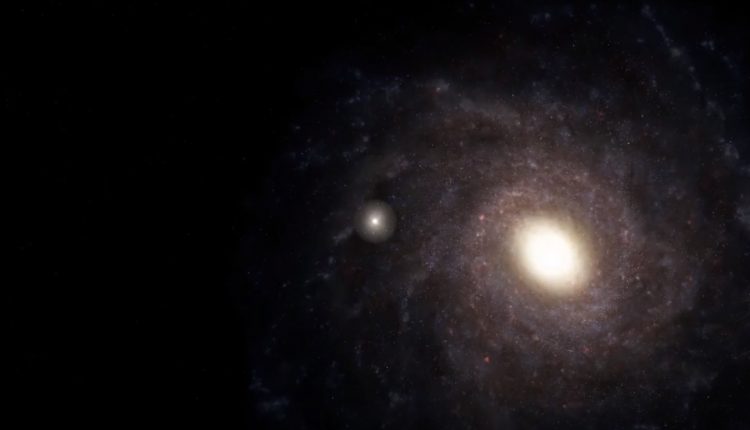 Binary star systems are everywhere. They make up a large percentage of all known solar systems: as far as we know, about half of all sun-like stars have a binary partner. But we haven’t had the opportunity to study them in detail yet. That’s going to change. Using data from the European Space Agency’s spaceship Gaia, a team of researchers has just compiled a gigantic new catalog of nearby binary star systems, showing that at least 1.3 million of them exist within 3000 light years of the earth.

This detailed overview of our local galactic neighborhood gives researchers a tremendous choice of binary stars to delve into. Previous studies of binary stars such as the Tycho and Hipparcos catalogs (made between 1997 and 2002) only found around 13,000 paired stars. The sample size of the new Gaia survey is 100 times larger, which allows astronomers to create far more accurate models of star system formation.

The bright spherical swarm to the left of the galactic center in this artist’s depiction shows the 3000 light years around the earth that were examined in the new catalog of binary stars. Photo credit: Kareem El-Badry / UC Berkeley and Jackie Faherty / AMNH

Confirming the existence of a binary system is not an easy task. Two stars that appear close to each other in the sky from our point of view can actually be very far apart. They are simply on a similar line of sight.

To find out if the stars are actually close together, astronomers rely on the parallax effect: the apparent movement of a distant object when the viewer’s perspective changes. In other words, astronomers have to observe the distant stars twice from two different positions in Earth’s orbit around the Sun. The positions of the stars in the sky seem to change from one perspective to the second. If the observed stars seem to move together, they are close to each other; If they don’t, they are far apart.

This GIF shows parallax by comparing two images of Proxima Centauri (the star closest to our Sun). The first image was taken from Earth, the second from New Horizons outside Pluto. The comparison shows that Proxima Centauri is much closer to us than the background stars, which do not seem to move with them. Photo credit: NASA / Johns Hopkins Applied Physics Laboratory / Southwest Research Institute / Las Cumbres Observatory / Siding Spring Observatory / Edward Gomez

Parallax is most useful for measuring nearby stars. Beyond about 3000 light years from Earth, the apparent motion is just too small to be measured accurately. Because of this, this new catalog focuses on nearby binary systems rather than distant ones.

The researchers – Kareem El-Badry, Hans-Walter Rix and Tyler M. Heintz – hope that the new data set will offer astronomers a wealth of new research opportunities. The team is particularly interested in studying binary pairs that include white dwarfs (old stars in their final stages of development). White dwarfs no longer produce fusion reactions in their core, which means that they cool slowly and measurably over time. This makes it possible to estimate the age of the white dwarfs, while main sequence stars (middle-aged stars like our sun) have so far been much more difficult.

This is where studying binary systems becomes useful. As the researchers explain, stars in binary pairs usually form simultaneously with their partners. Both stars were “born from the same gas cloud and have orbited each other ever since. So they are essentially the same age, original composition and distance, but generally different masses and occasionally different stages of evolution. “So if you can date one star in the pair (because it is a white dwarf, for example), you will also know the age of the other star by association, even if it is a main (usually non-datable) star.

The new catalog includes 15,982 of these white dwarf and main sequence binaries – a huge sample size, beyond anything previously available, and allowing astronomers to better understand the history, ages, and evolution of nearby Sun-like stars.

The data also holds some surprises. One of the strangest discoveries is that double stars usually have the same mass as their partners.

“This is really strange,” said El-Badry, “because most of them are separated by hundreds or thousands of AU, so they are so far apart that conventional star formation theories should have their masses random.” But the dates tell a different story: they know something about the masses of their companions. “

El-Badry believes that the best explanation for this phenomenon is that the stars formed close to each other and were later tossed apart by the gravitational pull of other stars and objects passing through the system.

More surprises will emerge as astronomers dive into the new catalog. We have only just begun to determine the makeup of our local galactic neighborhood. Binary systems offer new tools for characterizing our environment. Combined with our growing knowledge of star types, gas clouds and exoplanets, binary star systems help us understand our place in the galaxy better than ever.

Artistic rendering of millions of binary stars observed in the vicinity of Earth. Photo credit: UC Berkeley video by Roxanne Makasdjian, based on animation by Jackie Faherty, AMNH, and data from Kareem El-Badry.