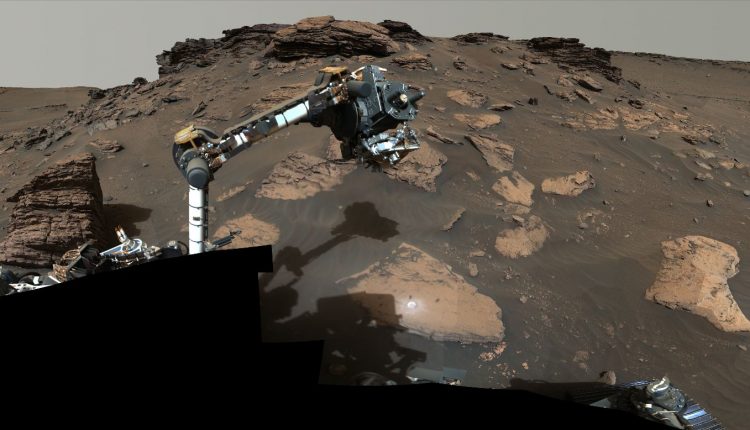 Scientists at NASA’s Perseverance Mars rover said today the rover collected several “tempting” organic rock samples from an ancient river delta on the red planet. Those samples have now been stowed away for a planned future mission that hopes to recover the samples and bring them back to Earth from Mars for the first-ever sample return.

“The rocks we have examined in the delta have the highest concentration of organic material that we have found on the mission so far,” said Ken Farley, Perseverance project scientist, during a press conference on Thursday, September 15. “And of course, organic molecules are the building blocks of life, so it’s very interesting that we have rocks deposited in a lake in a habitable environment that contain organic matter.”

With the four samples collected in the delta, the rover has now collected a total of 12 samples. More details on each sample can be found on this NASA website.

The rover’s landing site, Jezero Crater, is home to this fan-shaped delta that formed about 3.5 billion years ago where a Martian river and lake appear to converge. Perseverance is currently studying the delta’s sedimentary rocks, formed when particles of different sizes were deposited in the once-watery environment. During its first scientific campaign, the rover explored the crater floor and found igneous rocks that form from magma deep underground or during volcanic activity on the surface.

Now, in its second scientific campaign, the rover is studying the delta where it found organic material. While both Perseverance and the Curiosity rover have already found organic matter on Mars, this latest discovery was made in an area where, in the distant past, sediment and salts were deposited in a lake under conditions where life may have existed.

Farley said they found, for example, a sandstone bearing grains and rock fragments that originated far from Jezero Crater — and a mudstone containing intriguing organic compounds.

“Wildcat Ridge” is the name of a rock about 1 meter wide that was probably formed billions of years ago when mud and fine sand settled in an evaporating saltwater lake. On July 20, the rover abraded part of the surface of Wildcat Ridge to analyze the area using the Scanning Habitable Environments with Raman & Luminescence for Organics & Chemicals, or SHERLOC, instrument.

Analysis by SHERLOC revealed that the samples contain a class of organic molecules that correlates with those of sulfate minerals. Sulfate minerals found in sedimentary rock strata can provide important information about the aqueous environments in which they formed.

“This correlation suggests that both sulfates and organic matter were deposited, conserved and concentrated in this area during the evaporation of the lake,” said SHERLOC scientist Sunanda Sharma during the press conference. “Personally, I find these results so moving because it feels like we’re in the right place with the right tools at a very pivotal moment.”

NASA said organic molecules are made up of a variety of compounds, mostly made of carbon and usually containing hydrogen and oxygen atoms. They can also contain other elements such as nitrogen, phosphorus and sulphur. While there are chemical processes that produce these molecules that don’t require life, some of these compounds are the chemical building blocks of life. The presence of these specific molecules is considered a potential biosignature — a substance or structure that could be evidence of past life, but could also have been produced without the presence of life.

“We chose Jezero crater for Perseverance to explore because we thought it had the best chance of providing scientifically excellent samples – and now we know we sent the rover to the right place,” said Thomas Zurbuchen , NASA Assistant Administrator for Science in Washington. in a press release. “These first two scientific campaigns have produced an amazing variety of samples to be returned to Earth from the Mars Sample Return campaign.”

NASA and the European Space Agency (ESA) are collaborating to plan paths to bring the first samples of Martian material back to Earth for detailed study. The current plan is for a Sample Return Lander to land near or in Jezero Crater and bring with it a small rocket onto which the samples collected by Perseverance will be loaded. Two Ingenuity-like helicopters would provide a secondary way to take samples on the Martian surface. Once the Probe Cache was launched from the Red Planet, another spacecraft would capture it in Mars orbit and then bring it back to Earth, perhaps in the early to mid-2030s. These first samples collected and returned could answer a key question: Was there ever life on Mars?