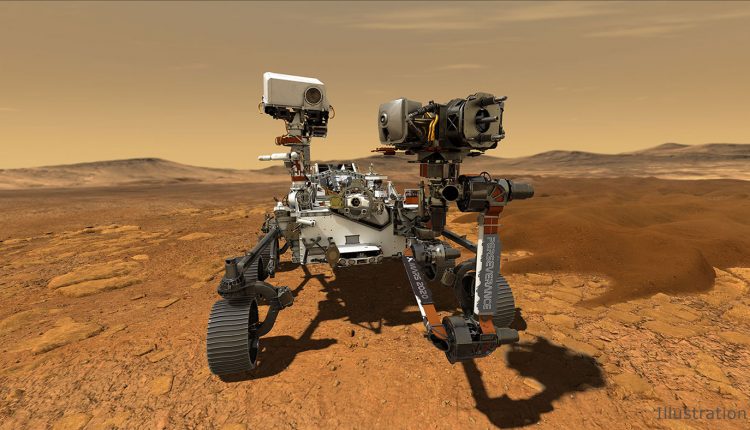 On Feb. 18th, 2021, NASA’s Perseverance rover landed within the Jezero Crater on Mars. Like its predecessor, Curiosity, a fellow member of NASA’s Mars Exploration Program (MEP), the goal of Perseverance is to seek out evidence of possible life on Mars (past and present). A key part of this mission will be the first sample return ever performed on Mars, where samples obtained by Perseverance will be placed in a cache for later retrieval and return to Earth.

For the past five months, mission controllers at NASA have been driving the rover further from where it landed (Octavia E. Butler Landing Site) and conducting test flights with the Ingenuity helicopter. NASA is now in the midst of making final preparations for Perseverance to collect its first sample of Martian rock. This historic first is expected to begin by the end of the month or by early August and will culminate with the return of the samples to Earth by 2031.

This rock will come from an area known as the “Cratered Floor Fractured Rough,” a 4 km2 (1.5-square-mile) patch of crater floor that may contain Jezero’s deepest and most ancient layers of exposed bedrock. These rocks will also be the most significant sample return since the Apollo astronauts brought rocks back from the Moon. These samples are still teaching us things about the formation of the Earth-Moon System and the evolution of the Solar System.

Still from the interactive map showing the location of the Perseverance rover and Ingenuity helicopter. Credit: NASA/JPL-Caltech

“When Neil Armstrong took the first sample from the Sea of Tranquility 52 years ago, he began a process that would rewrite what humanity knew about the Moon. I have every expectation that Perseverance’s first sample from Jezero Crater, and those that come after, will do the same for Mars. We are on the threshold of a new era of planetary science and discovery.”

This time, procuring the first sample of Martian rock will take about 11 days to complete, compared to the 3 minutes and 35 seconds it took Armstrong needed to take the first lunar sample. Unlike the Apollo astronauts, Perseverance needs to receive instructions from mission controllers, subject to a 4- to 24-minute delay. Similarly, the process takes time because it relies on the most complex mechanism ever sent to space, Sampling and Caching System (SCS).

The sequence begins with the rover placing everything it needs from the SCS within reach of the 2 m (7 foot) robotic arm. An imagery survey will follow so the NASA science team can determine where exactly it will take the first sample from and a secondary target site in the same area for what is known as “proximity science.” As Vivian Sun, the science co-lead from NASA’s Jet Propulsion Laboratory (JPL), said in a recent NASA press release:

“The idea is to get valuable data on the rock we are about to sample by finding its geologic twin and performing detailed in-situ analysis. On the geologic double, first we use an abrading bit to scrape off the top layers of rock and dust to expose fresh, unweathered surfaces, blow it clean with our Gas Dust Removal Tool, and then get up close and personal with our turret-mounted proximity science instruments SHERLOC, PIXL, and WATSON.”

Once the samples are procured, Perseverance will use its suite of advanced scientific instruments to examine them in stunning detail to learn more about their composition. These include the Scanning Habitable Environments with Raman & Luminescence for Organics & Chemicals (SHERLOC) instrument that will search for evidence of organic molecules that form in the presence of water and could be an indication of life.

This instrument is assisted by the Wide Angle Topographic Sensor for Operations and eNgineering (WATSON), a color camera for taking close-up images of rock grains and surface textures. There’s also the Planetary Instrument for X-ray Lithochemistry (PIXL) that uses an X-ray spectrometer to identify chemical elements at a tiny scale. Perseverance will also use its SuperCam and Mastcam-Z instruments (both located on the rover’s mast) to study the local rocks and soil.

The SuperCam works by firing a laser at the surface of rocks and soils to produce a small plume, which it then examines with cameras and spectrometers to look for signs of organic compounds. The Mastcam-Z, meanwhile, will take high-resolution imagery and video of samples to enable a more detailed examination. Working together, these five instruments will allow for an unprecedented level of analysis of geological materials at the worksite.

Once the pre-coring science is complete, the mission team will give the rover a full Martian day (or Sol) to charge up its batteries for sample collection. This will begin the following day and start with the sample-handling arm within the Adaptive Caching Assembly (ACS) retrieving and heating a sample tube, inserting it into a coring bit, then transferring both to a rotatory-percussive drill on Perseverance‘s robotic arm.

The drill will fill the tube with a core sample, then transfer it and the coring bit back into the ACS to be measured, photographed, hermetically sealed, and stored. Once all the tubes are filled, they will be left behind in a cache that could be picked up by a joint NASA-ESA Mars Sample Return (MSR) mission, including an orbiter, lander, rover, and launch vehicle – which could launch as early as 2026.

The next time those samples are observed would be in a cleanroom facility back on Earth, where scientists would inspect them using instruments far too large to send aboard a spacecraft to Mars. However, as Perseverance project scientist Ken Farley (a W.M. Keck Foundation Professor of Geochemistry at Caltech) indicated, no one expects the samples to contain perfectly-preserved fossilized remnants of ancient life:

“Not every sample Perseverance is collecting will be done in the quest for ancient life, and we don’t expect this first sample to provide definitive proof one way or the other. While the rocks located in this geologic unit are not great time capsules for organics, we believe they have been around since the formation of Jezero Crater and incredibly valuable to fill gaps in our geologic understanding of this region – things we’ll desperately need to know if we find life once existed on Mars.”

Nevertheless, having Martian rock and soil samples available for analysis here on Earth will prove invaluable. Like the Apollo Moon rocks, generations of scientists will be able to examine them using increasingly sophisticated instruments to learn more about the formation and evolution of Mars, particularly how it transitioned from being a warmer, wetter environment where life could exist to the extremely cold and dry place it is today.

Most importantly, this research will pave the way for human missions to Mars, where astronaut crews will spend days or even weeks on the surface investigating Mars’ geology, climate, atmosphere, and surface environment. Be sure to check out this video of the Perseverance rover’s Sample Caching System, courtesy of NASA JPL: