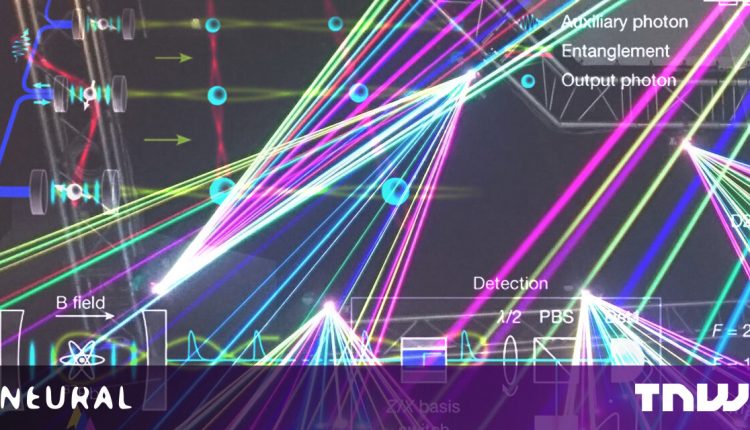 A team of scientists from the Max Planck Institute of Quantum Optics recently demonstrated a record-breaking experiment that could turn the quantum computing industry on its head.

One of the biggest challenges facing STEM researchers today is the difficulty of building a fault-tolerant, stable quantum computer.

In essence, modern physicists are darting back and forth between trying to scale quantum computers to functional sizes and attempting to squelch all the noisy errors as the systems grow.

When it comes to qubits, the quantum equivalent of computer bits, bigger is usually better. But it’s also much noisier.

The main reason for this is that it’s incredibly difficult to produce qubits reliably without relying on random states — this is called the probabilistic method for generating qubits.

Essentially, scientists just sort of smash things around until the desired result emerges.

The researchers at the Max Planck Institute for Quantum Optics took a different route.

According to their paper:

We have presented a scalable and freely programmable source of entangled photons, demonstrating—to our knowledge—the largest entangled states of optical photons to this day. It is deterministic in the sense that no probabilistic entangling gates are required. This gives us a clear scaling advantage over previous schemes.

Quantum computing relies on entanglementthat’s when two or more objects are prepared in such a way that anything that happens to one affects the other with total disregard for distance.

Typically, photons (individual units of light) are entangled inside of a special kind of crystal. This results in a type of entanglement that’s relatively unpredictable. Scientists struggled to generate qubits effectively using this method because it’s probabilistic.

The Max Planck team did away with the crystal creation chamber and instead turned a single atom into an entangled photon generator.

Per a press release from the Max Planck Institute:

The researchers generated up to 14 entangled photons in an optical resonator, which can be prepared into specific quantum physical states in a targeted and very efficient manner. The new method could facilitate the construction of powerful and robust quantum computers, and serve the secure transmission of data in the future.

The team managed to beat the previous record of 12 entangled photons using this method and they reached generation levels of near 50%.

In other words, they were able to generate stable entangled photons nearly half the time. This allowed them to perform longer, more accurate measurements on the photons themselves.

This could very well represent a ‘eureka moment’ on par with Google’s recent discovery of time crystals.

According to the researchers, this technique for generating stable qubits could have massive implications for the entire field of quantum computing, but especially for scalability and noise-reduction:

At this stage, our system faces mostly technical limitations, such as optical losses, finite cooperation and imperfect Raman pulses. Even modest improvements in these respects would put us within reach of loss and fault tolerance thresholds for quantum error correction.

It’ll take some time to see how well this experimental generation of qubits translates into an actual computation device, but there’s plenty of reason to be optimistic.

There are numerous different methods by which qubits can be made, and each lends to its own unique machine architecture. The upside here is that the scientists were able to generate their results with a single atom.

This indicates that the technique would be useful outside of computing. If, for example, it could be developed into a two-atom system, it could lead to a novel method for secure quantum communication.

This Segway electrical scooter is $170 off in Prime Day sale