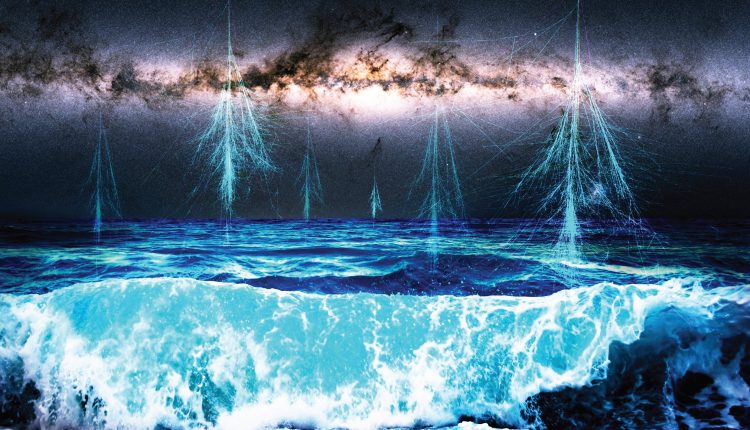 We live in an exciting time where next-generation instruments and improved methods are leading to discoveries in astronomy, astrophysics, planetary sciences and cosmology. As we look further and more deeply into the cosmos, some of the most enduring mysteries are finally being answered. Of particular interest are cosmic rays, the tiny particles of protons, atomic nuclei, or scattered electrons that have been accelerated to nearly the speed of light. These particles pose a major hazard to astronauts venturing beyond Earth’s protective magnetic field.

At the same time, cosmic rays regularly interact with our atmosphere (creating “showers” of secondary particles) and may even have played a role in the evolution of life on Earth. Because of the way they carry an electric charge that gets lost on its way through the Milky Way’s magnetic field, it has been difficult for astronomers to figure out where cosmic rays originate. But thanks to a new study examining 12 years of data from NASA’s Fermi Gamma-ray Space Telescope, scientists have confirmed that the strongest come from shock waves caused by supernova remnants.

The research was led by Ke Fang, an assistant professor at the Wisconsin IceCube Particle Astrophysics Center at the University of Wisconsin-Madison. She was joined by researchers from the Naval Research Laboratory, the Kavli Institute for Particle Astrophysics and Cosmology, the SLAC National Accelerator Laboratory, the Catholic University of America and the Center for Research and Exploration in Space Science and Technology (CRESST) at NASA’s Goddard Space Center . The paper describing their findings recently appeared in Physical Review Letters.

Attenuation of cosmic rays is one of the main considerations for future missions to the moon and Mars. Like solar radiation, these high-energy particles pose a risk to the health of astronauts because of their effects on skin tissues and organs, but also because of the “showers” ​​of secondary particles they generate. This happens when cosmic rays come into contact with our atmosphere, which Lower energy particles such as neutrons or electrons are produced, most of which are deflected into space.

In space, however, cosmic rays produce showers after striking dense material such as radiation shields. On board the ISS, the impact of these jets creates showers of secondary particles that penetrate the hull and fill the interior with lower-energy radiation. While ISS astronauts can limit their exposure to this radiation by returning to Earth, long-term missions don’t have that luxury. On manned missions to Mars, astronauts spend up to a year and a half in transit, plus several months on the Martian surface.

For this reason, it is important to know where cosmic rays come from and what kind of energy they can reach in order to develop improved protection and mitigation methods. For years, astronomers have been trying to figure out where the highest-energy cosmic rays come from—those that exceed 1,000 trillion electron volts (PeV). These beams have ten times the energy produced by the Large Hadron Collider, the world’s most powerful particle accelerator, and are almost powerful enough to escape our galaxy.

“Theorists believe that the highest energy cosmic ray protons in the Milky Way reach one million billion electron volts (or PeV) energies,” Fang explained in a recent NASA press release. “The precise nature of their sources, which we call PeVatrons, has been difficult to determine.”

While it’s difficult to trace cosmic rays back to their origin, scientists have observed them collide with interstellar gas near supernovae, producing gamma rays (the most energetic light that exists). From this, scientists in a previous study (also based on Fermi data) concluded that a significant part of the primary cosmic rays comes from supernova explosions. For their study, Prof. Fang and her colleagues analyzed 12 years of Fermi data from SNR G106.3+2, a comet-shaped supernova remnant located about 2,600 light-years from Earth in the constellation Cepheus.

While cosmic ray particles would initially be trapped by the supernova remnant’s strong magnetic fields, their path leads them to repeatedly cross the supernova’s shock wave. The particles gain speed and energy with each pass, eventually becoming too fast for the supernova remnant to contain. At this point, they fly into interstellar space, where it becomes incredibly difficult to trace them back to their source. Co-author Henrike Fleischhack, researcher at the Catholic University of America in Washington and NASA’s Goddard Space Flight Center:

“This object has attracted a lot of interest for some time, but to crown it as a PeVatron, we need to prove that it accelerates protons. The catch is that electrons accelerated to a few hundred TeV can produce the same emission. Now, using 12 years of Fermi data, we believe we have proven that G106.3+2.7 is indeed a PeVatron.”

The supernova remnant is also notable for the pulsar J2229+6114 at its northern end, which astronomers believe emerged from the same supernova. This pulsar emits gamma rays as it spins, creating a stroboscopic effect (like a lighthouse) with energies typically less than 10 GeV. These emissions are only visible during the first half of the pulsar’s rotation and did not significantly disturb Fermi. Still, the research team was able to isolate the higher-energy emissions from G106.3+2.7 by analyzing gamma rays coming from the latter part of the cycle.

Their detailed analysis overwhelmingly shows that PeV protons drove the intense gamma-ray emissions they observed. This research has shown that supernova remnants are the source of the most powerful cosmic rays in the universe, although some questions remain. While astronomers have identified other potential sources of PeVatrons – including active galactic nuclei (AGNs) – supernova remnants remain high on the list. But out of about 300 known remains, only a few have been found emitting gamma rays at these energies.

“So far, G106.3+2.7 is unique, but it may turn out to be the brightest member of a new population of supernova remnants emitting gamma rays reaching TeV energies,” added Fang. “More of them may be revealed by future observations from Fermi and very high-energy gamma-ray observatories.”