Sand dunes on Mars change from season to season 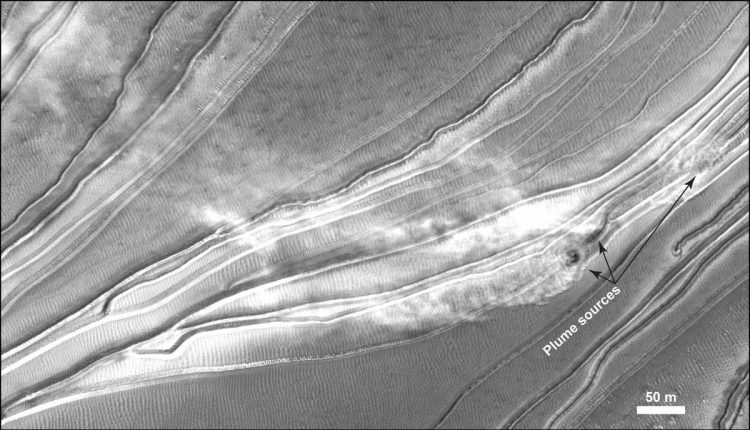 Mars’ gravity makes it an amazing place to find some of the greatest landscapes in the solar system. This includes the largest sand dune in the solar system – one that is located in Russell Crater. Now a team of scientists led by Dr. Cynthia Dinwiddie something unique on the sides of this massive dune. Occasionally, ravines form along its surface. Dr. Dinwiddie’s novel explanation for this phenomenon – CO2 boulders roll over the surface of the dune.

This is not the first time that the canyons have been observed: “For over two decades, planetary researchers have had a lot of ideas about how and when very long, narrow canyons formed on frost-affected sand dunes on Mars,” says Dr. Dinwiddie. Explanations for these canyons mostly refer to a type of CO2 ice or water ice.

There were two main features of the dune that led to a possible explanation of the gorges. The first was that changes have been actively made to the canyons in the dune since the observation began, contradicting the original theory that they had been around since time immemorial. The second was that bright blocks of CO2 ice could be seen in some canyons.

The novel data point that Dr. Dinwiddie’s extensive data search showed that the canyons form seasonally. In particular, they appear during the early spring equivalent of the southern Martian hemisphere. Dr. Dinwiddie first noticed this by identifying changes in brightness in the canyons themselves. Darker Gulley sand was exposed so that a change was easily noticeable even from distant remote sensing platforms such as the Mars Reconnaissance Orbiter.

Image recording of the changes in the canyons that led to a better understanding of their formation.
Photo credit: NASA / JPL-Caltech / University of Arizona

There are two main explanations for this change in surface albedo, both of which are related to the Martian times. In the fall and winter, temperatures drop to a point where CO2 freezes and ice builds up on the side of the dune. In spring, these ice deposits heat up and cause instabilities in their internal structure, which can lead to outgassing.

Occasionally this outgassing is simply released as a CO2 train. More rarely, however, it can actually split the block of ice, causing smaller fragments to blow up and eventually land on another part of the dune. They might even roll a little when they land, creating the canyons that are now much darker red when the darker sand beneath the surface is exposed without being covered in dust.

The theory accurately explains the active formation, seasonality, and the presence of CO2 ice in the canyons themselves. Unfortunately, all of this hard work to create darker spots will eventually be undone as the annual Martian dust storms cover the area with a more even coating of dust.

Despite the inconsistency of the discoloration, the canyons are still there, if a little more evenly. This novel theory about how they got there also helps show how active the Martian surface really is – even if it’s not directly flowing water.

Mission statement
Feathers to be observed from a dune with freshly formed ravines.
Photo credit: NASA / JPL / University of Arizona

Why did JJ Watt signal with Cardinals? The previous Texan star finds contract and suits in completely with Arizona

Biden, who publicizes Merck, will assist get Johnson & Johnson’s shot