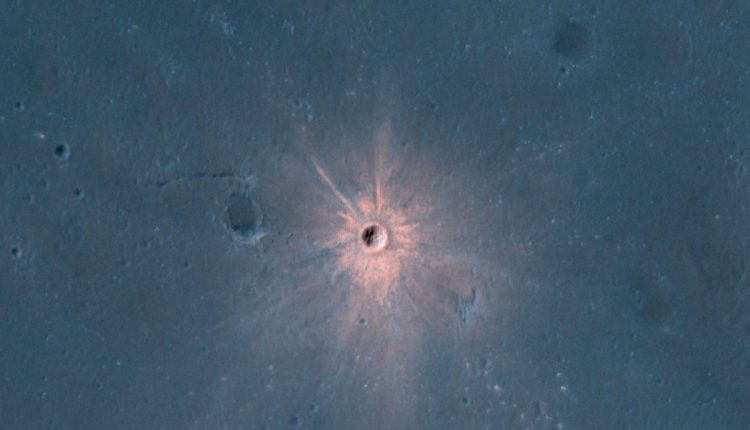 Meteors hit much harder on Mars than on Earth. The lack of atmosphere obviously contributes to this, but its proximity to the asteroid belt also makes the red planet a more likely target for a gravitationally disturbed rock. Now that we have satellite infrastructure that is consistently monitoring Mars, we can grasp the consequences of what happens when it is hit by space debris, and the results can be dramatic.

A powerful tool in this toolkit for impact hunting is the Mars Reconnaissance Orbiter (MRO). It has a variety of instruments that can both pinpoint areas of interest and display high resolution images, including HiRISE, the camera that captured the above image. This is exactly what happened to a new crater that the satellite noticed on one of its flybys.

The new crater shows up as a bright spot that scientists believe are flat materials beneath the surface that were blasted into the open on impact. This is in contrast to many new craters, which show up as dark spots when the dust from the ejecta is covered with a darker material. However, these bright points are clearly bright in the attached image because it was color-enhanced during post-processing.

The new crater has a diameter of 13 m and shows itself spectacularly on the newly published picture. It shows how active our solar system still is and how a small stone can have a huge impact when there is little to nothing that can stop it.

Learn more:
HiRISE – A new impact crater with a bright ejection
UT – The colorful walls of an exposed impact crater on Mars
UT – The “Happy Face Crater” on Mars has changed before our eyes