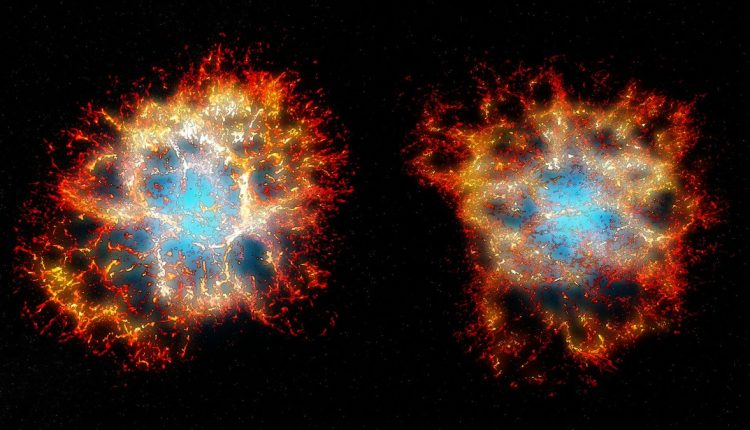 The Crab Nebula is arguably one of the most famous objects in the night sky. It was described as the M1 in Messier’s famous catalog. They are the remains of a supernova that was actually visible during the day almost 1000 years ago. And its remains have since amazed both professional and amateur astronomers.

Thanks to modern technology, we can now get an updated view of this iconic supernova remnant. Researchers from various institutions, led by Thomas Martin from Laval University, have created a three-dimensional image of the nebula for the first time.

This is important for more reasons than just looking at a cool new picture. Images, including the 3-D type, contain data and this data can be used to better understand the object that is the subject of the image. A long debate was about what kind of star the nebula was originally. Astronomers have long concluded that the star’s core was made up of oxygen, neon, and magnesium. However, they found a structure in the heart of the nebula that could call that composition into question.

In the center of the nebula is a honeycomb structure that is remarkably similar to the shape of an actual human heart. In models of “electron capture” supernovae, such as those believed to have caused the Crab Nebula, it is highly unlikely that such a structure has formed.

So far there has been no plausible alternative to the actual composition. But if there’s one thing that scientists need to answer that question, it’s data. And the data obtained from the Dr. Martin-led team have a lot to offer.

They used the SITELLE spectrometer that is part of the Canada-Hawaii-France Telescope in Hawaii (where it recently snowed). With this high-precision instrument, the team was able to collect 300,000 spectra across the entire nebula.

SITELLE has also collected data on many other comparable supernovae as this is exactly what it was designed for. Another interesting discovery from this preliminary data analysis is that the ejecta in at least two large supernova remnants form a large-scale ring structure that is also present in the Crab Nebula.

All of these images of rings and hearts form an appropriate backdrop for the upcoming Valentine’s Day. As more data is gathered, an image of one of the most famous objects in the night sky could end up on Valentine’s cards in the not too distant future.

Learn more:
Royal Astronomical Society: Spectacular ‘honeycomb heart’ in an iconic star explosion
RAS: 3D mapping of the Crab Nebula with SITELLE – I. Unfolding and kinematic reconstruction
UT: Gamma rays from the Crab Nebula
Hubblesite.org: Look into the heart of the Crab Nebula

Mission statement:
Crab Nebula at two different angles – the right one is from Earth, while the left one better shows the shape of the “heart” in the center of the nebula.
Photo credit: Thomas Martin, Danny Milisavljevic, and Laurent Drissen

Why temperature scanners will not assist us cease COVID-19