The donut that was a star 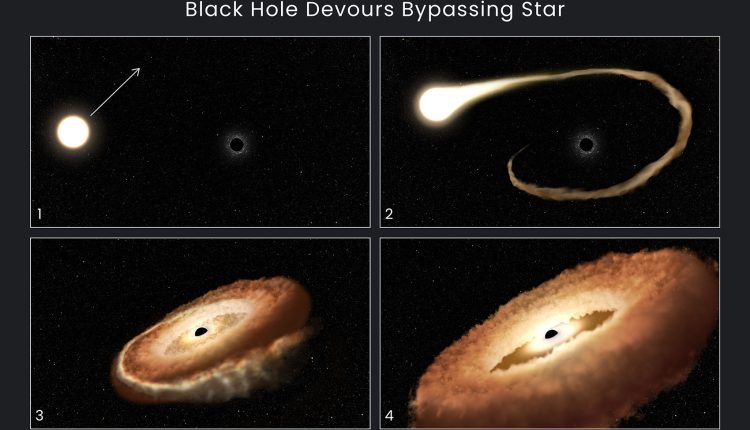 The death of a star is one of the most dramatic natural events in the universe. Some stars die in dramatic supernova explosions, leaving nebulae as the shimmering remnants of their former glory. Some simply wither away when they run out of hydrogen, piling up into a red giant in the process.

But others are being consumed by giant black holes, and as they are being destroyed, the black hole’s intense gravity rips the star apart and pulls its gas into a donut-shaped ring around the black hole.

That happened about 300 million light-years away in the galaxy ESO 583-G004 when a star got too close to the galaxy’s supermassive black hole (SMBH). The interaction between the SMBH and the star is called the Tidal Disruption Event (TDE). , and the All-Sky Automated Survey for Supernovae (ASAS-SN) detected it on March 1, 2022.

Astronomers directed the Hubble Space Telescope to observe the TDE, but it struggled to observe the event from such a great distance and was unable to take pictures. However, a team of astronomers did not give up. They examined the UV light from the shattered star and pulled out the details of the event. They presented their findings at the 241st meeting of the American Astronomical Society.

The TDE is called AT2022dsb and is one of about a hundred TDEs that astronomers have found. Astronomers believe that in a galaxy the size of the Milky Way there is a TDE about every 10,000 to 100,000 years. They are important events because there are large gaps in our understanding of black holes and their extreme environments. Watching a star be destroyed by a black hole is one of our few glimpses of these enigmatic objects.

This is where Hubble’s powerful UV observation capabilities came into play. UV observations of TDEs are rare and highly desirable, according to one of the astronomers involved in this research. “However, given the observation time, there are still very few tidal events observed in ultraviolet light. That’s really unfortunate because you can get a lot of information from the ultraviolet spectra,” says Emily Engelthaler, an intern at the Center for Astrophysics | Harvard & Smithsonian (CfA) in Cambridge, Massachusetts. “We’re excited because we can get these details of what the debris is doing. The tidal event can tell us a lot about a black hole.”

This TDE was close enough and bright enough to allow detailed UV spectrometry of the event, which is unusual for normally difficult-to-observe events. Astronomers have been able to collect spectrometric data for a longer period of time than normal. Spectrometry showed the presence of hydrogen, carbon and more in the former star’s gas.

“Usually these events are difficult to observe. You might get a few observations early in the disturbance when it’s really bright. Our program is different in that it’s designed to look at a few tidal events over a year to see what’s happening,” says Peter Maksym of the CfA. “We saw this early enough to be able to observe it in these very intense black hole accretion stages. We saw the growth rate drop as it turned into a trickle over time.”

Some interpretation is required to understand what the light from this TDE means. The researchers believe they are looking at an annular or toroidal ring of gas that used to be the star. The ring is about the same size as our solar system and is spinning around a black hole at its center.

“We’re looking somewhere around the edge of this donut. We see a stellar wind from the black hole sweeping across the surface and projected towards us at a speed of 20 million miles per hour (three percent of the speed of light),” says Maksym. “We’re really still dealing with the event. You shred the star and then it has this stuff that works its way into the black hole. And so you have models where you think you know what’s going on and then you have what you actually see. This is an exciting place for scientists: right at the intersection of the known and the unknown.”

This artist’s impression illustrates what it might look like when a star gets too close to a black hole, where the star is being squeezed by the black hole’s strong gravitational pull. Some of the star’s matter is pulled in and swirls around the black hole, forming the disk seen in this image. In rare cases like this, jets of matter and radiation are ejected from the black hole’s poles. In the case of the AT2022cmc event, evidence of the jets was discovered by various telescopes, including the VLT, which determined that this was the most distant example of such an event. Image credit: ESO/M.Granimeter

In the popular imagination, black holes are voracious devourers of stars and other matter. Nothing, not even light, can escape their grasp. The most powerful black holes are the giants that lurk at the center of galaxies like ours: supermassive black holes (SMBH), and as this work shows, they can devour entire stars.

That’s all true, but SMBHs do more than just consume matter. They also glow brightly in X-ray, UV, and optical light, and can sometimes emit energetic jets back into their galaxy as part of a poorly understood process called black hole feedback. This is part of the inseparable connection between SMBHs and galaxies. Somehow their growth and development are connected, but there are many unanswered questions.

This composite image shows the galaxy cluster Hercules A. It highlights the complex interplay between the central galaxy, the radio jets from its supermassive black hole, and the X-ray bright intracluster medium. This feedback from black holes is important for the evolution of galaxies, but there are still many unanswered questions. Photo credits: X-ray: NASA/CXC/SAO, Optical: NASA/STScI, Radio: NSF/NRAO/VLA)

This is what makes TDEs so important. One of the only opportunities for astrophysicists to study an SMBH is when a star gets too close. The energy released by the event offers a glimpse into the physics of black holes.

TDEs have been mainly theoretical until recent years. Now they are the subject of intense observation. Using TDEs, astrophysicists can watch the SMBHs create wind and turn jets on and off as they consume a star. And we should find more of them in the near future.

Tidal event names usually begin with the letters AT, meaning Astrophysical Transient. Transients are objects that somehow change rapidly over time. They blink or flicker, or they move through space on short time scales. Some TDEs, like those in this study, are found through supernovae surveys, and supernovae are just one type of transient.

Our ability to detect transients will take a big leap starting in 2023 when the Vera Rubin Observatory sees first light. It will survey all of the available sky each week and will detect a large number of transients, including TDEs. And future telescopes like the Giant Magellan Telescope and the European-Extremely Large Telescope will be made aware of these events and able to observe them quickly.

We can only find answers by observing only one TDE at a time.