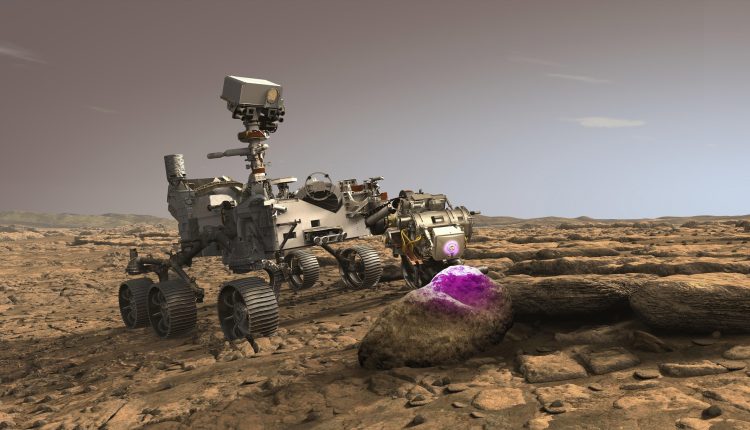 Everything happened so fast! On Thursday, February 18, NASA’s Perseverance rover landed in Jezero Crater on Mars and broadcast its first image of the Martian almost immediately. This was followed by photos of the Mars Reconnaissance Orbiter and photos of the entry, descent and landing (EDL) of the rover. Then there was the panorama video, a sound recording and the use of the Ingenuity helicopter within a week!

But that’s nothing compared to what happened next. Shortly after the rover started drilling into the bottom of Jezero crater, Perseverance found evidence of fossilized bacteria! The search for life on Mars has finally hit Paydirt! Okay, that didn’t happen … at least not yet. But what if it is? After all, one of the primary goals of Perseverance is to look for evidence of past lives on Mars. What will the impact be if and when it finds it?

The Perseverance Rover is NASA’s ninth mission to land on Mars. Like its predecessors, its task is to characterize the geology, atmosphere and climate of Mars and to pave the way for human exploration. However, the rover also focuses on astrobiology, which refers to the study of life in the entire universe. As the closest inhabitable place in our solar system beyond Earth, Mars is the focus of our astrobiological efforts.

“To quote Carl Sagan: ‘When we see a hedgehog staring in the camera, we know that there is a current and certainly ancient life on Mars, but based on our previous experience, such an event is extremely unlikely. Extraordinary claims require extraordinary evidence, and the discovery that life exists elsewhere in the universe would surely be extraordinary. ‘“

Thanks to the many rovers, orbiters, and landers that have explored Mars in the past, scientists know that Mars was a very different place billions of years ago than it is today. Its atmosphere was denser, its climate warmer, and liquid water flowed on its surface. This led to many of the features observable today, such as the preserved river delta in the Jezero crater.

This feature indicates that around 3.5 billion years ago Jezero was a lake with water flowing into it. This caused sediments to build up over time, resulting in the formation of a river delta rich in clays. While the lake may have long since disappeared, scientists suspect that somewhere in this 45 km wide crater there might be biosignatures just waiting to be found.

Given the relatively short window of time Mars had for habitability, the chances are that only simple life forms (such as single-celled bacteria) would have emerged. On earth, there is some of the oldest evidence of life in the form of microbialites, sediment deposits made from carbonate sludge that are formed with the help of photosynthetic cyanobacteria.

One possible route endurance could be across the Jezero crater. Photo credit: NASA / JPL-Caltech

“We believe that the best places to look for biosignatures are in Jezero’s lakefront or in coastal sediments that may be encrusted with carbonate minerals, which are particularly good at sustaining certain types of petrified life on earth. But when looking for evidence of ancient microbes in an ancient alien world, it is important to keep an open mind. “

Using its advanced suite of scientific instruments, Perseverance will collect rock core samples in metal tubes and place them in a supply cache (which will be retrieved by a future ESA mission). These instruments include the rover’s camera suite, especially the one on the rover’s mast, which can be zoomed in to inspect targets (Mastcam-Z).

There is also the SuperCam instrument, also located on the mast, which can use a small laser to examine promising research targets. To do this, the laser creates small clouds of plasma clouds that are then analyzed to determine the chemical composition of the target. If the data obtained reveals something interesting, the rover can examine it more closely with its two turret-mounted instruments.

These are known as the Planetary Instrument for X-ray Lithochemistry (PIXL) and as Scanning Habitable Environments with Raman & Luminescence for Organics & Chemicals (SHERLOC). The former relies on small x-rays to look for chemical biosignatures, while the latter uses its own laser to detect concentrations of organic molecules and minerals that have been formed in aqueous environments.

Artist’s impression of ingenuity on the surface of Mars with the Perseverance Rover in the background. Credit NASA / JPL

Together, these two tools will effectively create high-resolution maps of elements, minerals and molecules in Martian rocks and sediments that astrobiologists will use to determine which ones should be collected and eventually sent back to Earth. As Bobby Braun, program manager for Mars Sample Return at JPL, stated:

“The instruments required to definitively prove microbial life on Mars are too large and complex to bring it to Mars. That’s why NASA is working with the European Space Agency on a multi-mission called Mars Sample Return to retrieve the samples collected by Perseverance and bring them back to Earth for analysis in laboratories around the world. “

“We have strong evidence that Jezero Crater once had the ingredients for life. Even if, after analyzing the returned samples, we come to the conclusion that the lake was uninhabited, we have learned something important about the range of life in the cosmos, ”said Williford. “Whether or not Mars was ever a living planet, it is important to understand how rocky planets like ours form and evolve. Why did our own planet remain hospitable when Mars became a barren wasteland? “

In short, the Perseverance Mission is dedicated to the search for life and is endowed with the best that modern science can offer. The question naturally arises as to what happens if and when it succeeds?

This illustration shows the Jezero Crater – the landing site of the Mars 2020 Perseverance Rover – as it may have looked like billions of years ago on Mars. Photo credit: NASA / JPL-Caltech

Good for a start, the announcement would spread like wildfire around the world. Imagine the headlines: “Perseverance Finds Evidence for Life on Mars!” “Mankind discovers alien bacteria!” The excitement would be felt and felt wherever the news came. Of course, this would also raise some very important questions, the answers to which would have pretty drastic implications.

The first question that arises is whether or not life on Mars is related to life on Earth. If the answer to this question is yes, scientists would have solid evidence of lithopanspermia, which is life between planets in a star system. Alternatively, this could be an indication of panspermia, in which the life of celestial bodies such as asteroids and comets is distributed throughout the cosmos.

In this case, it could be argued that Earth and Mars came from the same source (although this would be extremely difficult to prove). Dr. Tanja Bosak, professor of geobiology at MIT and group leader of her program for geology, geochemistry and geobiology, is also the Returned Chief Scientific Officer for NASA Mars 2020 Perseverance Mission. As she emailed Universe Today:

“The most direct test for the genetic relationship of a Martian and land life would be to compare the information molecules (DNA, RNA) and the presence of such molecules in everything we find … In the best case, I would find fossils of microbes or such a biosignature , but DNA and RNA have not been preserved for billions of years, from when surface life was possible in the Jezero crater. However, if we see something that looks like fossil cells upon sample return and discover some organic biosignatures, it would automatically support the similarities between previous life on Mars and life on Earth. “

Artist’s impression of water beneath the surface of Mars. Photo credit: ESA / Medialab

Second, the discovery of evidence of past life on Mars should give credibility to the theory that life there still exists today. Similar to the disappearance of the surface water of Mars, it is assumed that microbial life could also have migrated underground as a result of changes in the planet’s climate. In fact, research has been done showing how microbes can survive in salty water spots beneath the surface.

As Dr. Bosak added, the scientific consensus is that modern surface life on Mars is highly unlikely, which is why Perseverance aims to collect samples that preserve past life evidence. Even so, the existence of the past life will make the issue of planetary protection all the more urgent when crewed missions begin to Mars, especially if they result in a permanent human presence there.

Robotic missions are already forced to exercise caution around potential locations for microbial life. A good example of this is the time when Curiosity came across a discolored patch of sand (considered a surface brine) and was forced to redirect its way around it. If ever human habitats are built on Mars (either temporarily or permanently), there is always the possibility that we will cause harm to Martian organisms.

The Perseverance Rover doesn’t have the final say on this, but the data it collects and the sample return it performs is an integral part of the puzzle. After all, the search for life on Mars is like the search for meaning in the universe: ongoing! And while we wait for answers, here is some perfectly fitting music to help us pass the time. Take it away David Bowie!