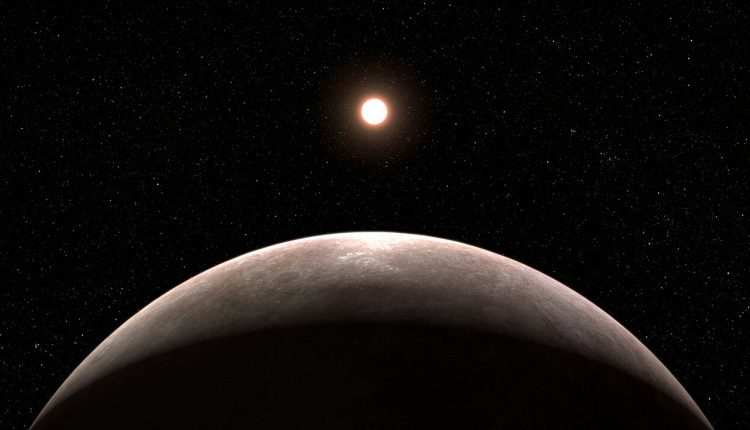 The James Webb Space Telescope is the most powerful telescope ever launched into space. This force has led to a number of observational successes: ancient galaxies, eclipsed star-forming regions, and an exoplanet atmosphere. Now the telescope has identified its first exoplanet, and it’s a rocky planet the size of Earth.

The planet is called LHS 475b and is about 41 light-years away. NASA’s TESS (Transiting Exoplanet Survey Satellite) first found evidence that the planet was there, but those were just clues. Now the JWST has confirmed it.

The research team that found LHS 475b is led by Kevin Stevenson and Jacob Lustig-Yaeger, both from the Applied Physics Laboratory at Johns Hopkins University in Laurel, Maryland. They presented their findings to the American Astronomical Society (AAS) on Wednesday, January 11, 2023.

“Webb is bringing us closer to a new understanding of Earth-like worlds beyond the solar system, and the mission is just beginning.”

Webb’s powerful near-infrared spectrograph (NIRSpec) confirmed the planet after only two transits in front of its star LHS 475, a red dwarf in the constellation of Octans. The endorsement is another endorsement of James Webb’s power and precision. “There is no question that the planet is there. Webb’s flawless data confirms this,” said Lustig-Yaeger. “The fact that it’s also a small, rocky planet is impressive for the observatory,” Stevenson added.

A lightcurve from the NASA/ESA/CSA James Webb Space Telescope near-infrared spectrograph (NIRSpec) shows the change in brightness over time of the star system LHS 475 as the planet passed the star on August 31, 2022. The graph shows the change in the relative brightness of the star-planet system over three hours. The spectrum shows that the system’s brightness remains constant until the planet begins to pass the star. It then decreases, which represents when the planet is directly in front of the star. The brightness increases again when the planet is no longer blocking the star, and then levels off. Image credits: NASA, ESA, CSA, L. Hustak (STScI), K. Stevenson, J. Lustig-Yaeger, E. May (Laboratory of Applied Physics Johns Hopkins University), G. Fu (Johns Hopkins University) and S. Moran (University of Arizona)

One of the scientific goals of the JWST is to study the atmospheres of exoplanets. Its powerful instruments allow it to identify chemicals in the atmosphere of planets light-years away. “These first observations from an Earth-sized rocky planet open the door to many future possibilities for studying rocky planet atmospheres with Webb,” said Mark Clampin, director of the Astrophysics Division at NASA Headquarters in Washington. “Webb is bringing us closer to a new understanding of Earth-like worlds beyond the solar system, and the mission is just beginning.”

While the telescope has confirmed the planet, it has yet to figure out its atmosphere. “The data from the observatory is beautiful,” said Erin May, also of Johns Hopkins University’s Applied Physics Laboratory. “The telescope is so sensitive that it can easily detect a range of molecules, but we can’t draw any definitive conclusions about the planet’s atmosphere yet.” Even more accurate future measurements with the Webb will reveal more about its composition, and the research team could carry out these measurements this summer.

Researchers used the NASA/ESA/CSA James Webb Space Telescope’s near-infrared spectrograph (NIRSpec) to observe exoplanet LHS 475 b on August 31, 2022. As this spectrum shows, Webb observed no detectable amount of any element or molecule. The data (white dots) are consistent with a featureless spectrum depicting a planet with no atmosphere (yellow line). The purple line represents a pure carbon dioxide atmosphere and is indistinguishable from a flat line at current accuracy. The green line represents a pure methane atmosphere, which is not preferred because methane, if present, would block more starlight at 3.3 microns. Image credits: NASA, ESA, CSA, L. Hustak (STScI), K. Stevenson, J. Lustig-Yaeger, E. May (Laboratory of Applied Physics Johns Hopkins University), G. Fu (Johns Hopkins University) and S. Moran (University of Arizona)

While a full picture of LHS 475b’s atmosphere, if any, will have to wait until summer, the team has made some progress. “There are some terrestrial atmospheres that we can rule out,” explains Lustig-Yaeger. “It cannot have a thick methane-dominated atmosphere similar to that of Saturn’s moon Titan.”

But they can’t rule out a thick, carbon dioxide-rich atmosphere like Venus’ because those atmospheres can be so dense. “In contrast, a 100 percent carbon dioxide atmosphere is so much more compact that it becomes very difficult to detect,” said Lustig-Yaeger.

LHS 475b is hotter than Earth, but because it orbits a red dwarf, that doesn’t rule out an atmosphere.

The planet LHS 475 b is a few hundred degrees warmer than Earth and very close to its star, completing one orbit in just 2 days. However, its red dwarf star is much cooler than our Sun, leading scientists to theorize it may still have an atmosphere.

The uncertainty about LHS 475b’s atmosphere also extends to uncertainty about small rocky exoplanets in general. Larger gas giants are much easier to spot and characterize, while rocky planets tend to be smaller. They block less light, making them more difficult to spot along the way, and their atmospheres are also smaller, making them more difficult targets for spectroscopy.

“With this telescope, rocky exoplanets are the new frontier.”

But this result shows that JWST can deliver on its promise of characterizing exoplanet atmospheres, and that it is only just getting started. “We are at the forefront of exploring small, rocky exoplanets,” said Lustig-Yaeger. “We’ve only just begun to scratch the surface of what their atmospheres might look like.”

Rocky exoplanets are not uncommon. They are common with other stars. But their atmospheres are not well constrained. We don’t know what to expect from them, and the rocky planets in our solar system don’t necessarily tell us what to expect.

This image shows exoplanet LHS 475 b, based on new findings from the NASA/ESA/CSA James Webb Space Telescope. It’s rocky and almost the same size as Earth. The planet orbits its star in just two days, much faster than any planet in the solar system. Image credits: NASA, ESA, CSA, L. Hustak (STScI)

Venus’ atmosphere is dominated by CO2 while Earth’s is dominated by nitrogen. Mercury’s atmosphere is extremely thin, made up of atoms blasted from its surface by the sun and meteorite impacts. Actually an exosphere, it contains oxygen, sodium, hydrogen and other elements, but only in minute amounts. Mars probably once had a thick atmosphere, but it now has a very thin atmosphere that is 95% CO2.

Characterizing rocky planet atmospheres is important because it will help scientists model how rocky planets form and evolve. We will expand our understanding of potential habitability. We are on the verge of characterizing many of them over the next decade, thanks in particular to the JWST.

“This rocky planet confirmation underscores the precision of the mission’s instruments,” Stevenson said. “And it’s just the first of many discoveries it will make.” Lustig-Yaeger agreed: “With this telescope, rocky exoplanets are the new frontier.”

Scientists have learned a lot about rocky exoplanets in recent years, although their atmospheric composition is not well understood. Researchers believe that most rocky planets form with an initial hydrogen/helium atmosphere that is later lost to space. They believe that while rocky exoplanets begin atmospherically the same, they evolve very differently and can have vastly different compositions.

Biosignatures are one of the major goals in studying the atmosphere of rocky exoplanets. We have much to learn about biotic and abiotic chemistry on other worlds and what different potential biosignatures might mean in different atmospheric contexts. The JWST also helps with this.

Soon, the JWST will have help studying the atmospheres of rocky exoplanets. Two ground-based telescopes, the Giant Magellan Telescope (GMT) and the Thirty Meter Telescope (TMT), should see their first light in the next few years, although there are no exact dates. They should bring revolutionary advances in our study of rocky exoplanets.